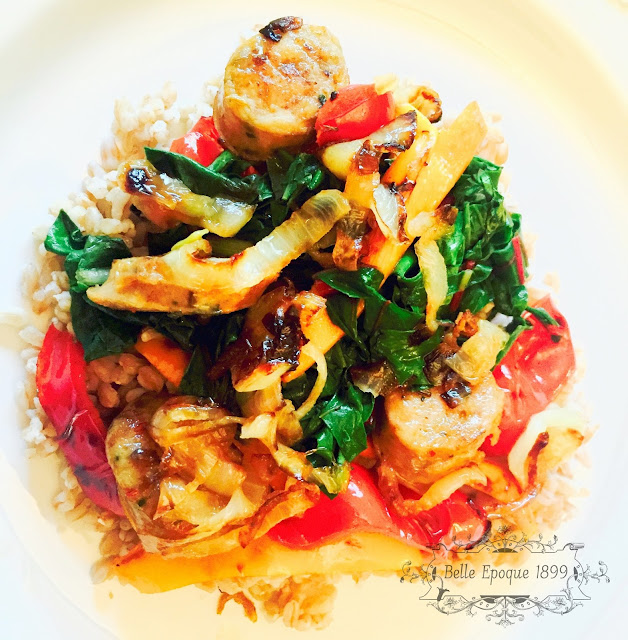 Come late summer, every Monday my coworker brings the bounty of her garden to the office to share. Peppers of all hues and sizes, eggplants like amethyst globes, dragon's egg cucumbers, gorgeous, leafy kale. 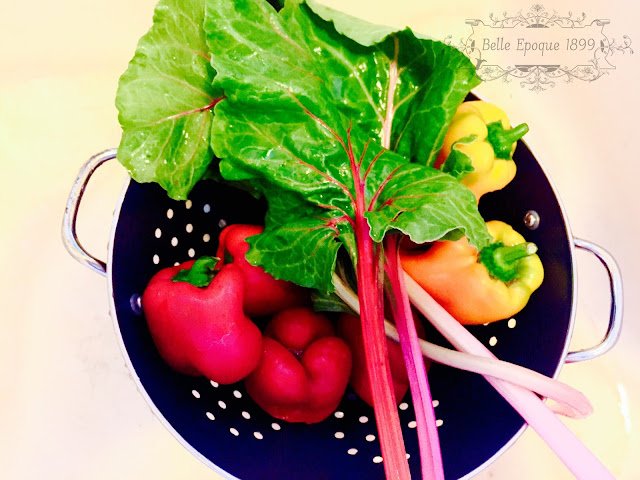 One of the quick dinners I love to make with some of my coworker's homegrown veggies is this dish. It's so vibrant with color and the unique taste of fresh vegetables not bought from the store. Together with the spicy sausage, the sweetness of the caramelized onions, and the farro that anchors the entire dish – you have a simple, filling meal full of bold taste. 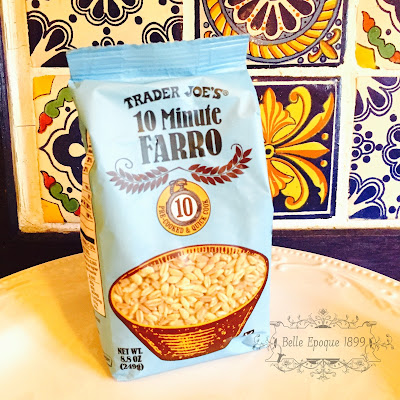 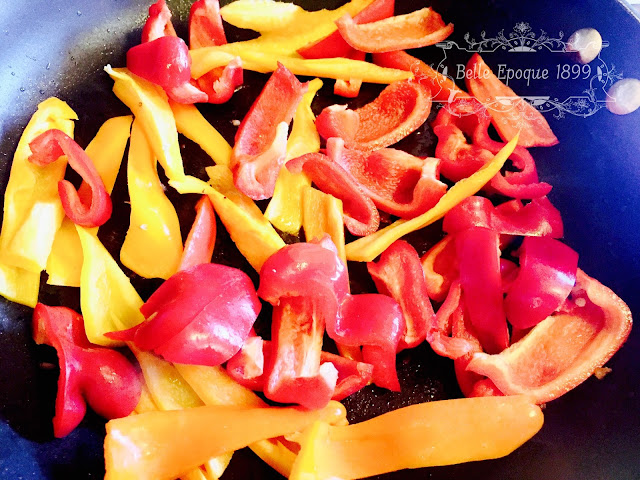 You could saute all the ingredients together but I prefer to cook them separately but in the same pan, to each ingredient's desired doneness, while building layer upon layer of taste. Because each ingredient cooks with different time lengths, the order you cook them is important.

If you don't have cooked farro at hand, I suggest buying 10-minute farro (I got my 8.8 oz package at Trader Joe's) and boiling the entire contents while cooking the rest.

2.   Once heated, spread yellow onion slices to cover the bottom of the pan in one layer. They need to brown a bit – not too much – but enough so they are translucent and slightly sweet, about 10 minutes. Saute at least once.

3.   Once the onions have caramelized, take out of the pan, leaving as much oil in the pan as possible, and into a large bowl.

4.   Next place the sausage pieces onto the skillet, with the cut sides down. Do not saute, but just brown each side, then take out and place in the large bowl with the onions.

5.   Hopefully there's a little bit of oil left (not too much because you want to quickly sear the peppers, not drown them in oil).  Turn up the heat to medium-high.

6.   Once the skillet is hot, place all your julienned bell peppers onto the skillet so that they cover the bottom in one layer. You want to just barely cook them. They should have a bit of brown char but still crispy and vibrant with color. Do not overcook, as you don't want them faded and limp. Take out of the skillet and put into the large bowl on top of the sausage slices & onions.

7.   If there is only a little bit of oil left at this point, that's okay. But if the pan is dry, just drop a whisper of olive oil in it and turn the heat back to medium.

8.   Now come your mounds of chiffonade kale with a pinch or two of salt. Do not cook too long, you just want them limp and darkened with that lovely emerald green color. Take out quickly once limp before the color fades.

To plate it I prefer once again to layer. First comes the warm, cooked farro; then the bell peppers; next the sausages; then the kale; and then crown it all with some onion slices.
Posted by Madame X at 8:00 AM No comments: 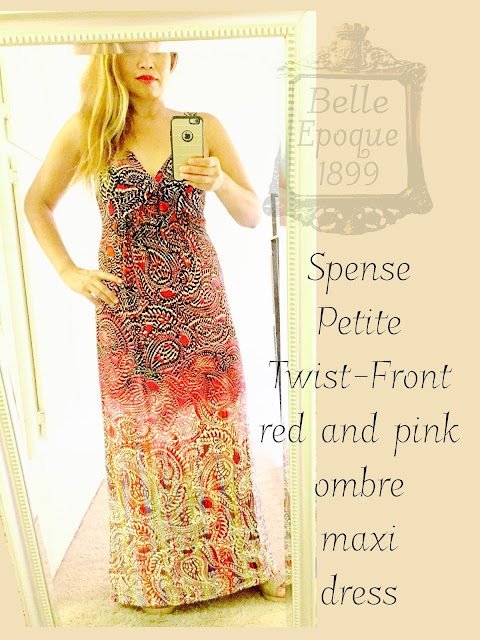 There are enough hot days left to parade this light and lovely red and pink ombre number from Spense. Full price: $89.00/Sale price: $49.99. 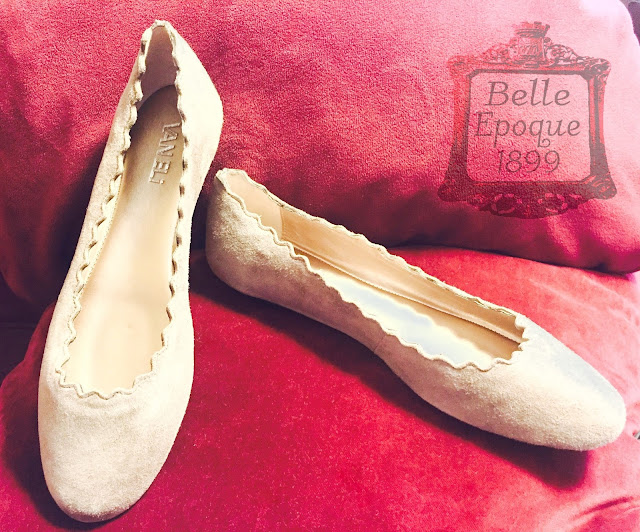 I have this pair in black and was so pleased with how comfortable they were, I decided to scoop up the taupe as well. The scalloped edge is what makes this style particularly sweet. Regular price: $49.99/Sale price $39.94 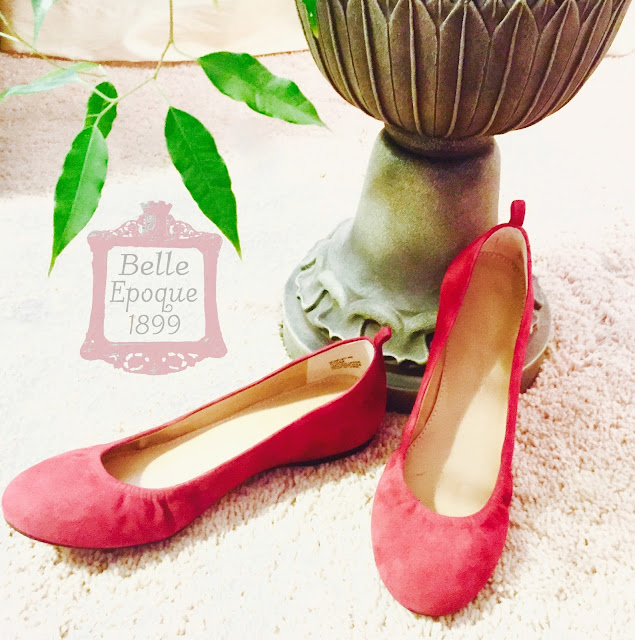 The last pair of red flats I bought were so stiff and painful that ever since, I have been in a search for the perfect red flats. This shade of cranberry red is not as common as the bright red I see more often. And yes, these are very comfortable. Regular price: $49.99/Sale price $39.94 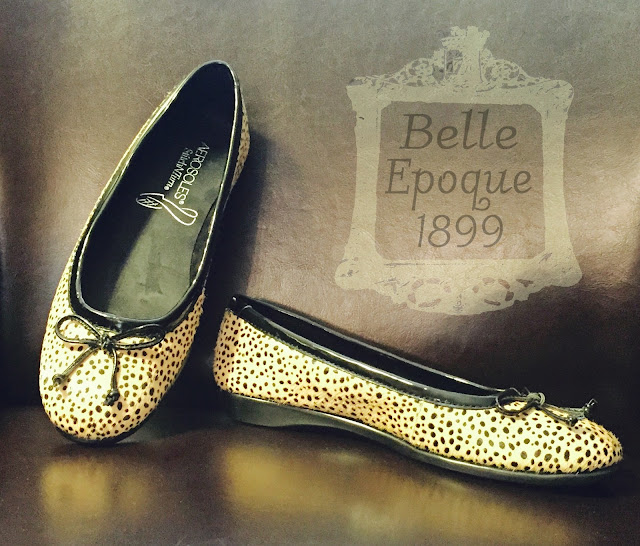 Leopard is the new neutral! These shoes are sooo comfy, with a gel-like footbed, and they look great as a pop of print with an all black outfit or with jeans and any color top. . Regular price: $69.99/Sale price $39.94 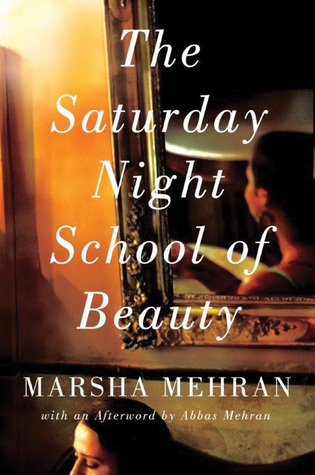 A moving tale of exile, friendship, and love from the bestselling author of Pomegranate Soup.
In the wake of the Iranian revolution, Zadi Heirati, a single mother, flees to Buenos Aires with her young daughter. She decides to do what she knows best and opens a beauty salon, but as she meets her new neighbors and discovers their shared passion for poetry, the idea develops into much more than a job. The inhabitants of her apartment building form an eclectic community: a sick ex-prisoner and his daughter; a promising medical student; a timid hairdresser; a newlywed couple with a dark past; a young revolutionary; an eccentric pilgrim of Mecca; and at the heart of the group, Zadi, whose humble small business becomes a spiritual hub where she hosts weekly readings of Persian poetry.

Drawn together by the revolution in their homeland, these neighbors share words that inspire each to turn inward and discover beauty long buried. At once familiar and extraordinary, this story weaves disparate lives together into a tapestry of unique grace, wit, and lyricism.

Imagine coming upon Da Vinci's Mona Lisa in an unfinished state – perhaps a third of the details are sketched out, but not fully rendered with brushstrokes. Yet, you can still see without a doubt the lady's beauty, her mysterious smile, the grace of her hands. You can only visualize what the painting would look like in its finished state, but you can conclude from what was set down on canvas how breathtaking the whole would have been.

That scenario is how I can best describe The SaturdayNight School of Beauty by Marsha Mehran. It contains so many passages that excited me – beautiful, heartbreaking, profound, shocking, memorable. Often-times I would have to read some parts over again because they moved me. I love the narrative format of the book, which interweaves the background stories of Persian expatriates in Buenos Aires who come together for weekly poetry night. They recite and passionately discuss the Koran, Rumi, Hafez, and other poets, often illuminating the characters' psyches.

"What happened to people when they began to revolt, to change from within, and to become something else.  That was why he loved poetry.  What really drew him to the words.  He understood those lines that called to him.  Revolt, the turn in a turn."

Mehran alternates from these poetry nights to exploring the haunting pasts of each character and what drove them from Iran to Argentina. These chapters are just as riveting as the poetry scenes, in that I felt immersed in Persian culture.

Mehran's writing is as lyrical as the mystical poetry her characters discuss.

However, there are some uneven sections in the book. Some characters' backgrounds and plots don't feel fully fleshed out. Sometimes, a chapter will start delving into one character only to abruptly switch to another character's narrative. This was puzzling, as it was obvious to me how gifted and skillful the writer seemed. I got my answer when I read the heartbreaking foreword by the author's father. It seems Marsha Mehran died before completing the book and her father did the best he could to get it in a publishable state.

If you liked Reading Lolita in Tehran, you must read TheSaturday Night School of Beauty.

Marsha Mehran (1977-2014) was born in Tehran, Iran, left during the Revolution, at age 2, with her family. She then lived in such diverse places as Buenos Aires, The United States, Australia and Ireland. Marsha's talent and wit was evident from an early age: she became fluent in speaking Farsi, Spanish and English at age 6; she was identified as a gifted child at age 8 in The USA; and she excelled at learning to play the piano, nurturing her musical talent at the Elder Conservatory of Music in Adelaide. Her first book, Pomegranate Soup, published in 2005, was translated into 15 languages and published in more than 20 countries. The continuation, Rosewater and Soda Bread, was a hit sequel in Marsha's vision for a series of seven books. The third title, Pistachio Rain, was scheduled for publication in 2014 but disrupted by her demise in April that year. Her stand-alone book has been published in Australia and New Zealand, by Harper Collins, as The Margaret Thatcher School of Beauty and by Amazon Crossing as The Saturday Night School of Beauty. Marsha Mehran passed away, lonely, in Ireland in her Lecanvey cottage in 2014 at the age of 36. She leaves behind a literary legacy that will continue to thrive in her legion of fans across the globe. 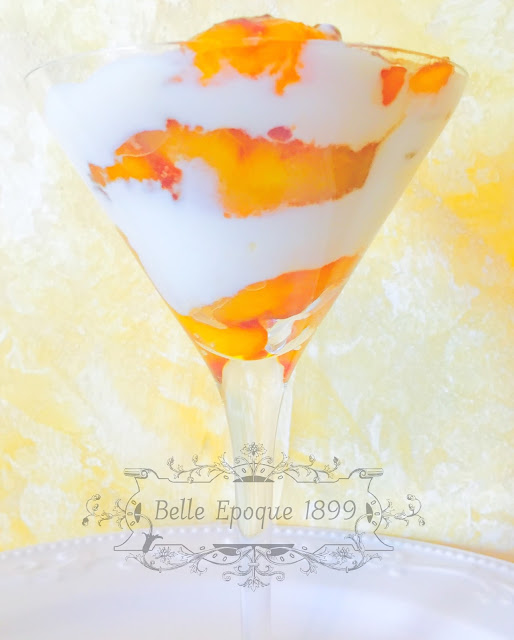 All of last week I was daydreaming about soft fresh peach slices nestled between thick layers of vanilla ice cream. As a reward to myself for finally getting over a month-long summer cold, I decided to dive into indulgence.

Peaches are everywhere this time of year but once I got to the store, all I could find were extremely firm ones – not at all the ripe fruit with yielding flesh of my dreams (mmm... that sounds a bit naughty, yes?). So I modified my dessert daydream of fresh peach slices to caramelized ones, which actually turned out even more scrumptious ladled hot just out of the pan onto cold ice cream and drizzled with brown sugar syrup.  For a slightly healthier version of this, substitute vanilla honey yogurt for the ice cream (recipe follows). 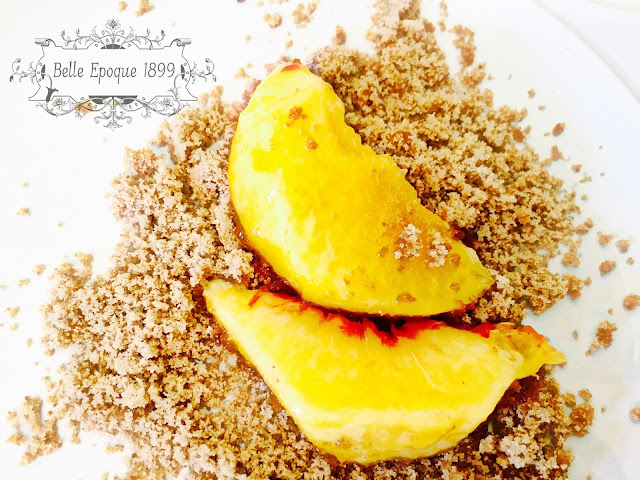 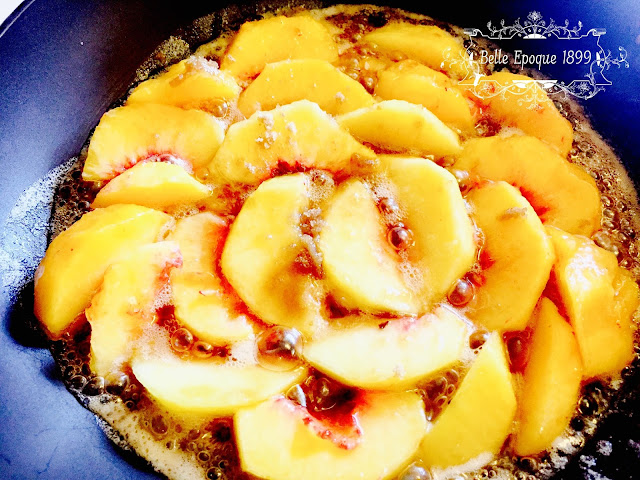 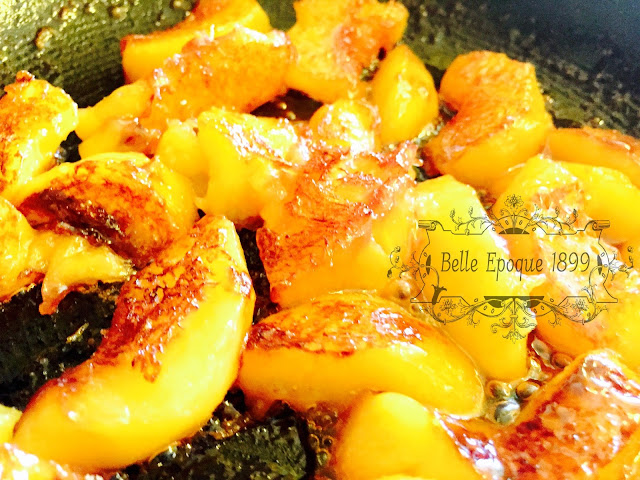 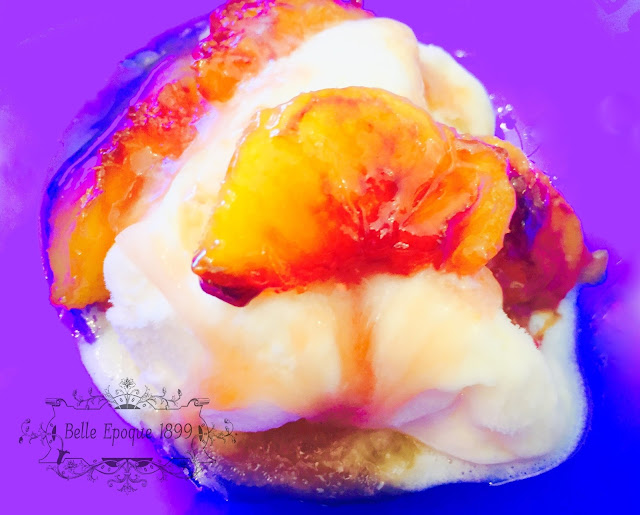 1.   Peel the skin and slice each peach into eighths.

2.   On a plate, coat each slice with brown sugar.

3.   Melt the butter on a skillet over medium high heat

4.   Once melted, place peach slices onto the skillet.

5.   When sizzling, lower the heat to medium-low and cover for 3-5 minutes until the peach juices and butter start bubbling and thicken to a syrupy consistency.

6.   While the peaches are still cooking, take a large spoon and start spooning out all the liquid onto a cup. This lovely peachy concoction will serve as your brown sugar syrup.

7.   Once all the liquid has been reserved, turn the heat back up to medium and brown both sides of the peach slices.

8.   While browning, prepare your scoops of ice cream on dishes. Once the peaches are done, place on top of the ice cream, drizzle with your brown sugar syrup and prepare to be transported to peach heaven! 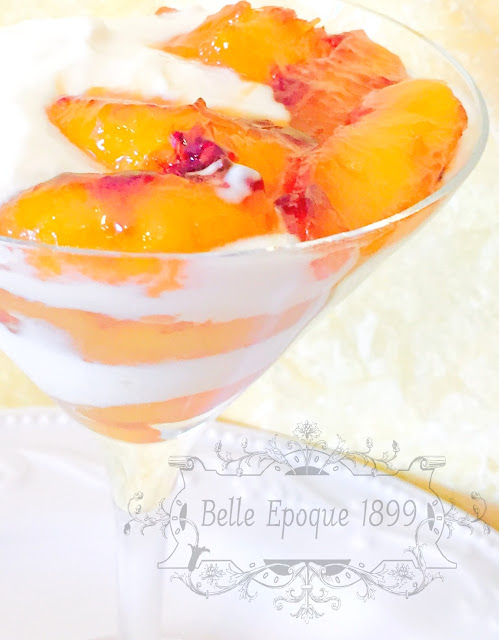 8.   Allow the peach slices to cool for about 10 minutes (I know, hard!) before layering with vanilla honey yogurt (see below) as a parfait . If straight out of the pan, the yogurt will turn into soup.


Mix all ingredients well until well combined.  Put back in the fridge to set and cool for about 15 minutes before eating with dessert.
Posted by Madame X at 8:00 AM No comments:

Pardon me while I furnish my new home.
Posted by Madame X at 9:55 PM No comments: