Book Review: Sorcerer to the Crown by Zen Cho 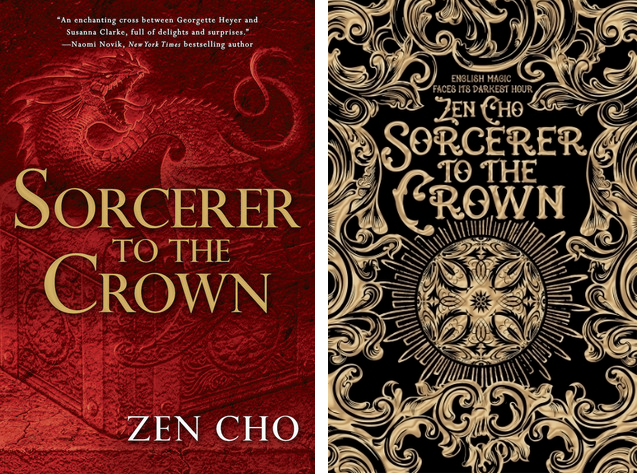 In this sparkling debut, magic and mayhem clash with the British elite…

The Royal Society of Unnatural Philosophers, one of the most respected organizations throughout all of England, has long been tasked with maintaining magic within His Majesty’s lands. But lately, the once proper institute has fallen into disgrace, naming an altogether unsuitable gentleman—a freed slave who doesn’t even have a familiar—as their Sorcerer Royal, and allowing England’s once profuse stores of magic to slowly bleed dry. At least they haven’t stooped so low as to allow women to practice what is obviously a man’s profession…

At his wit’s end, Zacharias Wythe, Sorcerer Royal of the Unnatural Philosophers and eminently proficient magician, ventures to the border of Fairyland to discover why England’s magical stocks are drying up. But when his adventure brings him in contact with a most unusual comrade, a woman with immense power and an unfathomable gift, he sets on a path which will alter the nature of sorcery in all of Britain—and the world at large…

By the end of the first chapter, I had to pause and catch my breath. I was so excited, I actually stopped breathing. With a mixture of almost painful eagerness and fear - fear that Sorcerer to the Crown would not measure up to my rapidly escalating expectations - I continued. Simply - it is dazzling.

The comparisons to Jonathan Strange and Mr. Norrell are warranted. There are similarities. Both are set in a magical England which depends upon magicians in political intrigues. And both have a very English flavor of clever wit. However, where Jonathan Strange lost me at 185 pages (despite its brilliant world building), Sorcerer to the Crown continuously enchanted me to the very end.

How Sorcerer to the Crown surpasses is in its diversity. Zacharias Whyte is a former slave who is the first and only black Sorcerer Royal in Regency England. Although he is constantly dishonored by his fellow magicians, he tries to maintain the highest code of conduct, even to his own detriment.

“Zacharias smiled without mirth. His chief aim had always been that he should stand beyond reproach in word and deed, since his colour seemed to prove a ground for any allegation. He was content-or at least resigned-but he needed no reminder of how he was circumscribed.

“’I am held by bounds of gratitude,” he said. The words were bitter on his tongue.”

When he comes upon Prunella, a half-Indian orphaned young woman with astonishing magical promise, he decides to instruct her despite the prohibitions against females practicing magic.

“Magic was too strong a force for women’s frail bodies-too potent a brew for their weak minds-and so especially at a time when everyone must be anxious to preserve what magical resource England still possessed, magic must be forbidden to women.”

There are magical assassination attempts, female vampire covens, witches, dragons, familiars and fairies ... set within the construct of a Regency romance, albeit a magical, almost modern one. Although there are underlying themes of race, gender, and class, Sorcerer to the Crown is above all a surprising delight. I thoroughly look forward to reading the further adventures of Zacharias and Prunella!

“Prunella had once thought life in London would be all flirting and balls and dresses, hitting attentive suitors on the shoulder with a fan, and breakfasting late upon bowls of chocolate. She signed now for her naivete.  Little had she known life in London was in fact all hexes and murder and thaumaturgical politics and she would always be rising early for some reason or other!”

Zen Cho was born and raised in Malaysia, and currently lives in London. She was a finalist for the Campbell Award for Best New Writer, a nominee for the Pushcart Prize, and her short story collection Spirits Abroad was a joint winner of the Crawford Fantasy Award. Sorcerer to the Crown is her first novel.
Posted by Madame X at 8:00 AM