Book Review: Where the Memories Lie by Sibel Hodge 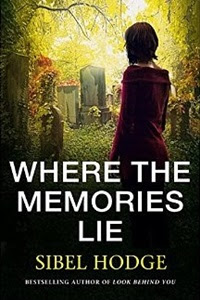 Twenty-five years ago Katie ran away from home and never came back. But now she’s suddenly reappeared in her best friend Olivia’s life—in the form of a chilling confession. Olivia’s father-in-law, wracked with guilt, says he murdered her all those years ago. Tom suffers from Alzheimer’s and his story is riddled with error and confusion. Except for one terrifying certainty: he knows where the body is buried.

As Olivia and the police piece together the evidence, they are left with one critical question. They have a crime, they have a confession, and now they have a body—but can any of it be trusted?

"By the time they found her remains, I hadn't thought about her for years. I'd been too busy getting on with my life. A life I thought was normal."

Normal is the perfect word for how Where the Memories Lie by Sibel Hodge begins. Normal, with uneasy edges that increasingly become frayed with each chapter until Olivia and her family's lives completely unravel with the shocking secrets unearthed from the past.

"...when the memories lie, sometimes it's best to let the truth stay hidden."

Told through the point of view of Olivia, a normal mom with self-confessed domestic failings (quickly, she won me over), I never had a frustrated moment as a reader thinking, well, that was obvious, why doesn't she get it? Olivia acted and thought the way an ordinary person with good common sense would; thus, the story was never dragged down with laborious conclusions. In fact, while getting into Olivia's head was easy, the story picked up speed at just the perfect narrative point to keep me quickly turning pages in suspense.

As the novel progressed, I had difficulty putting it down. I read it before work, during breaks, after work, as I cooked, sautéing peppers with one hand, Kindle in the other. Hodge writes in that wicked way that upon ending one chapter, I immediately had to start the next or else start twitching with unanswered questions. I had no dearth of possible scenarios and theories about what really happened to Katie, some of which were accurate – yet I did not see the "twist" coming at all. Well done, Ms. Hodge!

Sibel Hodge is the author of #1 bestseller Look Behind You. Her Amber Fox Mysteries and romantic comedies, Fourteen Days Later and The Baby Trap, are international bestsellers on Amazon, Barnes & Noble and iBooks. She writes in an eclectic mix of genres, and she’s a passionate human and animal rights advocate.


Her work has been nominated and shortlisted for numerous prizes, including the Harry Bowling Prize, the Yeovil Literary Prize, the Chapter One Promotions Novel Competition, The Romance Reviews’ prize for Best Novel with Romantic Elements, and Indie Book Bargains’ Best Indie Books of 2012. She was the winner of Best Children’s Book by eFestival of Words 2013, and winner of Crime, Thrillers & Mystery | Book from a Series in the SpaSpa Book Awards 2013. Her novella Trafficked: The Diary of a Sex Slave has been listed as one of the top 40 books about human rights by Accredited Online Colleges.
Posted by Madame X at 8:00 AM