Book Review: All the Stars in the Heavens by Adriana Trigiani 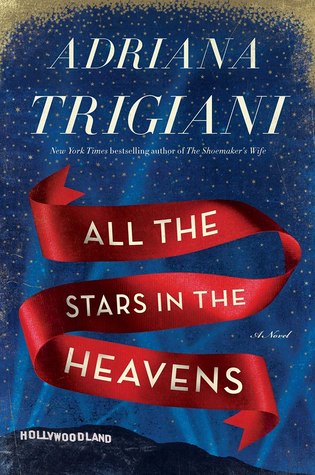 The movie business is booming in 1935 when twenty-one-year-old Loretta Young meets thirty-four-year-old Clark Gable on the set of The Call of the Wild. Though he’s already married, Gable falls for the stunning and vivacious young actress instantly.

Far from the glittering lights of Hollywood, Sister Alda Ducci has been forced to leave her convent and begin a new journey that leads her to Loretta. Becoming Miss Young’s assistant, the innocent and pious young Alda must navigate the wild terrain of Hollywood with fierce determination and a moral code that derives from her Italian roots. Over the course of decades, she and Loretta encounter scandal and adventure, choose love and passion, and forge an enduring bond of love and loyalty that will be put to the test when they eventually face the greatest obstacle of their lives.

Anchored by Trigiani’s masterful storytelling that takes you on a worldwide ride of adventure from Hollywood to the shores of southern Italy, this mesmerizing epic is, at its heart, a luminous tale of the most cherished ties that bind. Brimming with larger-than-life characters both real and fictional—including stars Spencer Tracy, Myrna Loy, David Niven, Hattie McDaniel and more—it is it is the unforgettable story of one of cinema’s greatest love affairs during the golden age of American movie making.

All the Stars in the Heavens is a wonderfully apt title for this sprawling novel set in 1930s Hollywood, with a cast of characters that include Clark Gable, David Niven, Spencer Tracy and the star of the novel – Loretta Young. I have been a fan since I watched an old video of The Crusades by Cecil B. DeMille in which she was just luminous, with her large, long-lashed eyes and sweet beauty. I watched a clip on Youtube recently and I had to cringe and laugh at it, except for Young – she was as exquisite as ever.

I was not aware of Young’s relationships/friendships with various leading men and so I had to Google as I read Trigiani’s fictionalized account, wondering how much of it was true. With some shock and discomfort, I read how after her death, Young’s family claimed she said her illegitimate daughter with Gable was a result of date rape. If that was true, then this romantic account (however fictionalized) would be inappropriate, to say the least. But, bear in mind that Young and her family were very devout Catholics. Young never publicly acknowledged the affair nor did she ever acknowledge her “adopted” daughter as her and Gable’s biological offspring. In fact, according to Young’s daughter, Young only admitted it upon being confronted by her and never spoke of it again. So there was a decades-long, determined effort to hide the relationship. Could her family have been keeping up appearances for propriety and religious purposes by claiming rape on her behalf? Maybe. Since Young herself never publicly spoke about the whole thing, we will never know.

Setting aside that unfortunate dissonance, All the Stars in the Heavens was full of juicy, behind-the-scenes chapters about the early days of Hollywood, how movies are made- and how stars are made.

Adriana Trigiani is beloved by millions of readers around the world for fifteen bestsellers, including the blockbuster epic The Shoemaker's Wife; the Big Stone Gap series; Lucia, Lucia; the Valentine series; the Viola series for young adults; and the bestselling memoir Don't Sing at the Table. Trigiani reaches new heights with All the Stars in the Heavens, an epic tale from the golden age of Hollywood. She is the award-winning filmmaker of the documentary Queens of the Big Time. Trigiani wrote and directed the major motion picture Big Stone Gap, based on her debut novel and filmed entirely on location in her Virginia hometown, and released nationwide in the fall of 2015. She lives in Greenwich Village with her family.
Posted by Madame X at 8:00 AM