Book Review: Tell the Story to Its End by Simon P. Clark 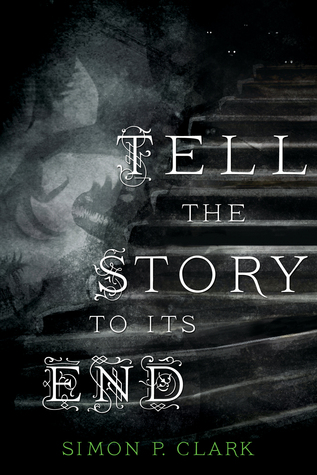 People are keeping secrets from Oli. His mum has brought him to stay with his aunt and uncle in the countryside, but nobody will tell him why his dad where his father is. Why isn't he with them? Has something happened? Oli has a hundred questions, and only an old, empty house in the middle of an ancient forest for answers. But then he finds a secret of his own: there is a creature that lives in the attic…

Eren is not human.
Eren is hungry for stories.
Eren has been waiting for him.

Sharing his stories with Eren, Oli starts to make sense of what's happening downstairs with his family. But what if it's a trap? Soon, Oli must make a choice: learn the truth—or abandon himself to Eren's world, forever.

Tell the Story to its End has a curious narrative framework, in that it begins in the middle of a conversation between Oli and Eren, the creature in the attic, who asks him to tell the story to its end, but without leaving out any dark feelings. What story, the reader immediately wonders. Then Oli begins and it turns out to be his own story, one that at first glance, appears to be like so many other middle grade novels, about a lonely boy who goes to live in an old country house.

Tell the Story to its End is a subtle and multi-layered novel. Ostensibly it is about Oli being spirited away by his mother to his grandmother's house in the country and the mysterious secret of why his dad has to stay in London. He finds an ancient creature hiding in the attic who seems to know everything about him and has one ravenous desire – for Oli to tell him stories.  Feeling resentful of the secrets being kept from him and neglected by his mother, Oli begins to spend more and more time with Eren, even over the sympathetic new friends he has made in town, Em and Takura.

"The thing – was he a bat? – was too huge to see. His wings merged into the shadows, his shape too fuzzy to make out. He grinned at me with small, sharp teeth and darkness whirled around him.  He cocked his head and bowed it slightly. 'Once upon a time," he said, "a boy dreamed, and all his wishes came true. Once upon a time, old things woke up, and magic – real magic – came back into the world.'"

The lure of stories and storytelling is at the heart of this novel. To Eren, and this world, the Story is the most important, truest thing of all, what gives him – and humans – immortality. Story is the balm and cure for what ails, how humans make sense of terrors and fears. Story illuminates the truth; therefore, story is the truth.

"Yarns and tales and the telling, they're all about unraveling the truths that life hides, you ken? It's about finding out, if a princess is locked in a tower, how would you get her down? It's about you, and the story, and where the two things meet."

For fans of Neil Gaiman's The Graveyard Book, Coraline, and The Ocean at the End of the Lane.

Simon P. Clark is a children's author living and working in NJ, USA. Originally from Britain, his debut novel Eren was published in the UK by Constable & Robinson in September 2014, and will be published in the US by St Martin's Press in June 2015.
Posted by Madame X at 8:00 AM