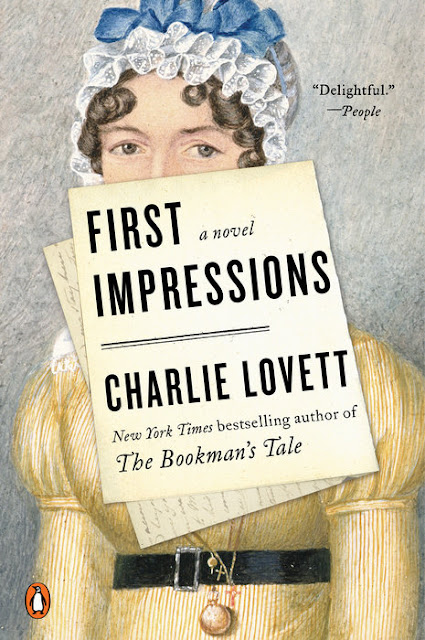 Book lover and Austen enthusiast Sophie Collingwood has recently taken a job at an antiquarian bookshop in London when two different customers request a copy of the same obscure book: the second edition of A Little Book of Allegories by Richard Mansfield. Their queries draw Sophie into a mystery that will cast doubt on the true authorship of Pride and Prejudice—and ultimately threaten Sophie’s life.

In a dual narrative that alternates between Sophie’s quest to uncover the truth—while choosing between two suitors—and a young Jane Austen’s touching friendship with the aging cleric Richard Mansfield, Lovett weaves a romantic, suspenseful, and utterly compelling novel about love in all its forms and the joys of a life lived in books.

I've read my share of Jane Austen published fanfiction, spinoffs, and inspirations. While not as startling different as Pride and Prejudice and Zombies, First Impressions has unique elements to commend it. Lovett alternates between two storylines: that of Jane Austen and her much older gentleman friend, Richard Mansfield (right away you know he will be very significant, just by his surname alone) and Sophie in the present, grieving the death of her beloved Uncle Bertram. First Impressions is elevated above the very crowded Austen genre in the sophisticated, nuanced writing. It is clear that Lovett knows everything Austen front and back. Not only that, every page is rendered not only with a homage to Austen but to book lovers in general. If you are a bookworm, you will delight in this novel.

Lovett skillfully renders the Austen chapters with the same style and intelligent dialogue found in her novels. On the other hand, the modern chapters have a completely different flavor yet its storyline incorporates touches that will be very familiar to Austen fans. Immediately we know who will be Wickham and who will be Darcy. Later on when the mystery (having to do with the provenance of Pride and Prejudice) gets underway, strong shades of Northanger Abbey color the plot twists.

My favorite parts though had to do with Sophie and her Uncle Bertram's loving relationship, one founded on their mutual love of reading. Their conversations about books, for example the difference between what is considered valuable versus expensive, will strike a chord with bibliophiles.

Sometimes something so ubiquitous and familiar as Austen's novels become like wallpaper - they're just there and one forgets how lovely and insightful it actually is. First Impressions will remind readers why we love Austen so much:

Sophie had never held a first edition of Pride and Prejudice, She had never had the opportunity to run her fingers over those spectacular words as they appeared in print for the very first time. Somehow seeing thme here in this volume from 1813 brought home to Sophie that Jane Austen had actually written these words. They had not simply appeared out of the ether. Sometimes, she thought, sentences like that become so famous that we cannot conceive a time when they did not exist. We can remember our own first encounters with those words, but that mankind should had had a first encounter with them seems almost impossible.
Posted by Madame X at 8:00 AM