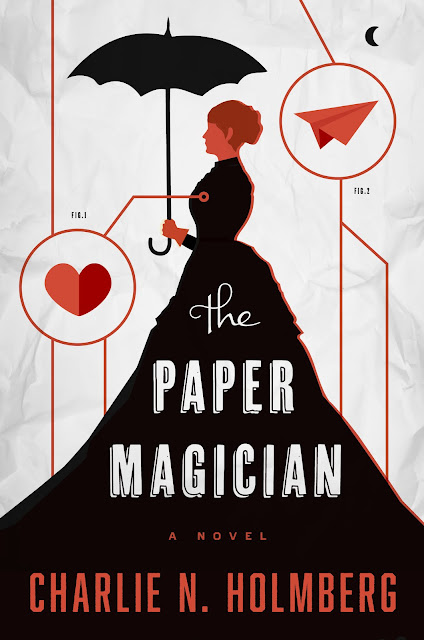 Ceony Twill arrives at the cottage of Magician Emery Thane with a broken heart. Having graduated at the top of her class from the Tagis Praff School for the Magically Inclined, Ceony is assigned an apprenticeship in paper magic despite her dreams of bespelling metal. And once she’s bonded to paper, that will be her only magic…forever.

Yet the spells Ceony learns under the strange yet kind Thane turn out to be more marvelous than she could have ever imagined—animating paper creatures, bringing stories to life via ghostly images, even reading fortunes. But as she discovers these wonders, Ceony also learns of the extraordinary dangers of forbidden magic.

An Excisioner—a practitioner of dark, flesh magic—invades the cottage and rips Thane’s heart from his chest. To save her teacher’s life, Ceony must face the evil magician and embark on an unbelievable adventure that will take her into the chambers of Thane’s still-beating heart—and reveal the very soul of the man.

I am an impatient reader, I’ll admit. If it does not ensnare me within the first three chapters (more often, the first chapter when my impatience is at its peak), then I have no qualms in abandoning the book altogether and never looking back.  I do not ever regret such practice because in the past I have given books, much lauded as well as mediocre ones, more chances than they deserve. Like the long-suffering partner in an unfortunate relationship, I have doggedly persevered to the thankless end.  I have given books second, third, even fourth chances, determined to find out why they drew so many raves before admitting sad defeat.  That is until I realized that life is short and there are many, many good books in the wide world.

When The Paper Magician first came out, I eagerly grabbed it because the synopsis sounded like I would love it.  However, I don’t know what was off – whether I was in the wrong mood or it was just not the right time but I quickly grew indifferent within the first chapter and moved it on top of the DNF pile without a second thought.

Fast forward to a year and some months later and something made me reconsider.  What was it? A couple mentions in my Twitter feed that nudged me perhaps.

Short story: I loved it so much that as soon as I finished it, I immediately went out and got the second and third books in the series and read it all in one weekend.

Long story: I was thoroughly enchanted by the worldbuilding – a magical world set in early 20th Century London comprised of Folders, Smelters, Gaffers, and the evil Excisioners. Ceony wants to be a Smelter, a metals magician, but because there is a shortage of Folders (paper magicians), she is forced to bond to paper and only do magic through paper for the rest of her life. Ceony is apprenticed to the eccentric Magician Thane who slowly opens up Ceony’s mind to the wonders of what she thinks is a boring discipline.  Folding is like origami magic, for example, where all one has to do is create a paper bird with precise folds and, spell it to “breathe” and it comes alive. So do a paper butler, an adorable paper dog (my favorite) and even the simplest of all, a paper plane.

Now delighted, The Paper Magician took my breath away with a narrative twist in which our heroine, barely initiated into Folding, has to go against a powerful Excisioner to save her mentor’s life.  What is paper against deadly blood magic? Holmberg answers with an inventive, unforgettable and heartstopping plot sequence.

The imagery is stunning, the writing is deft, and I believe I have found myself a new favorite author.


Moral of the story: First impressions aren’t always accurate.  If anything is worth a second chance – it is definitely a book.
Posted by Madame X at 8:00 AM