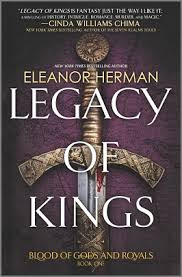 Imagine a time when the gods turn a blind eye to the agony of men, when the last of the hellions roam the plains, and evil stirs beyond the edges of the map. A time when cities burn, and in their ashes, empires rise.

Alexander, Macedon's sixteen-year-old heir, is on the brink of discovering his fated role in conquering the known world, but finds himself drawn to a newcomer…

Katerina must navigate the dark secrets of court life while keeping hidden her own mission: kill the queen. But she doesn't account for her first love…

Jacob will go to unthinkable lengths to win Katerina, even if it means having to compete with Hephaestion, a murderer sheltered by the prince.

And far across the sea, Zofia, a Persian princess and Alexander's unmet betrothed, wants to alter her destiny by seeking the famed and deadly Spirit Eaters.

Weaving fantasy with the shocking details of real history, New York Times bestselling author of Sex with Kings Eleanor Herman reimagines the greatest emperor the world has ever known, Alexander the Great, in the first book of the Blood of Gods and Royals series.

I will admit that after hearing about Legacy of Kings for months as the next hottest thing, I finally gave into the hype. At first, the introduction of so many characters, with alternating points of view from chapter to chapter, confused me and I was unsure whether I was going to go on. However, by the time the book arrived at Zo's perspective, I was well and truly hooked. This is a fantasy slash Greek historical/mythology of epic proportions, hence the large cast of characters. The narrative, despite the multiple perspectives, moves very fast, with twists and turns that kept me entertained.

Herman easily jumps from the POV of each character, humanizing them and making even the most villainous seem more human and sympathetic.

One of the book's flaws is the Harlequin romance aspect coloring each male-female relationship. Not every young male needs to fall in love with our heroine Katrina and the captive-captor romantic dynamic between Zo and Ochus isn't the most believable one.

Otherwise, I love this new take on Alexander the Great, especially the focus on strong female characters to equal his legendary status.
Posted by Madame X at 8:00 AM