Book Review: Paris, Paris: Journey into the City of Light by David Downie 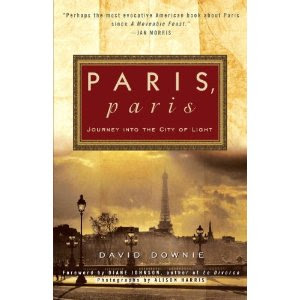 Swapping his native San Francisco for the City of Light, travel writer David Downie arrived in Paris in 1986 on a one-way ticket, his head full of romantic notions. Curiosity and the legs of a cross-country runner propelled him daily from an unheated, seventh-floor walk-up garret near the Champs-Elysses to the old Montmartre haunts of the doomed painter Modigliani, the tombs of Pиre-Lachaise cemetery, the luxuriant alleys of the Luxembourg Gardens and the aristocratic Оle Saint-Louis midstream in the Seine.

Downie wound up living in the chic Marais district, married to the Paris-born American photographer Alison Harris, an equally incurable walker and chronicler. Ten books and a quarter-century later, he still spends several hours every day rambling through Paris, and writing about the city he loves.  An irreverent, witty romp featuring thirty-one short prose sketches of people, places and daily life, Paris, Paris: Journey into the City of Light ranges from the glamorous to the least-known corners and characters of the world’s favorite city.

Surprising, illuminating, charming and fascinating.  Like Paris itself, this book is a fabulous little refreshing jolt. Just when you think you've read everything under the sun about this most famous city, Downie introduces, chapter by chapter, different views and vistas, different elements and characters that make Paris even more intriguing. From the cataphiles (those underground daredevils who illegally explore and party in the labyrinthine catacombs) to the boat people of the Seine (the chapter on the Seine itself is quite horrifying actually - you will never see it in quite the same romantic light again) to the bouquinistes (the booksellers on the Seine) and even a seduction school for Frenchmen (one of the funnier chapters), Downie informs and delights.

There is even a chapter on Belle Epoque Paris -

"Why were locals and visitors obsessed with 1900 and the Belle Epoque? The answer was easy: because many Parisians are still living in the period.

"As we see the portals of the latest fin de cycle receding in our rear-view mirrors, the two-faced god of thresholds seems to be staring fixedly at a bygone Paris, unwilling or unable to shake off the past.  Perhaps Janus is merely reminding us that in this old Europe of which Paris is still the cultural capital, to look forward we must first look back."

Paris, Paris is a lovely armchair trip and might give you some off-the-beaten-path ideas for your next visit.
Posted by Madame X at 8:00 AM