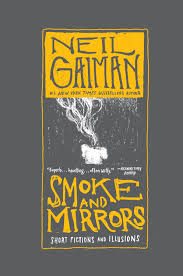 The distinctive storytelling genius of Neil Gaiman has been acclaimed by writers as diverse as Norman Mailer and Stephen King. Now in this new collection of stories — several of which have never before appeared in print, and more than half that have never been collected — that will dazzle the senses and haunt the imagination. Miraculous inventions and unforgettable characters inhabit these pages: an elderly widow who finds the Holy Grail in a second-hand store...a frightened little boy who bargains for his life with a troll living under a bridge by the railroad tracks...a stray cat who battles nightly against a recurring evil that threatens his unsusupecting adoptive family. In these stories, Gaiman displays the power, wit, insight and outrageous originality that has made him one of the most unique literary artists of our day.

Neil Gaiman's storytelling style is wise and witty and familiar yet strange and unique.  His stories and novels are so wonderfully inventive and at the same time have a disquieting, deep layer of truth to them. As if they're not fiction at all, but what lies behind the curtain of what we perceive as reality.

"Stories are, in one way or another, mirrors.  We use them to explain to ourselves how the world works or how it doesn't work. Like mirrors, stories prepare us for the day to come. They distract us from the things in the darkness."

The stories range from light-hearted fantasy to horror to science-fiction, each one compelling and thought-provoking. There's a retelling of Snow White from the wicked stepmother's point of view, a cure for cancer that has some unusual side effects, a werewolf story, and my favorite of them all, a strange wedding gift. As with his other short story collection, Gaiman includes an introductory chapter that explains the genesis of each story, which sometimes is as entertaining as the story itself.
Posted by Madame X at 8:00 AM