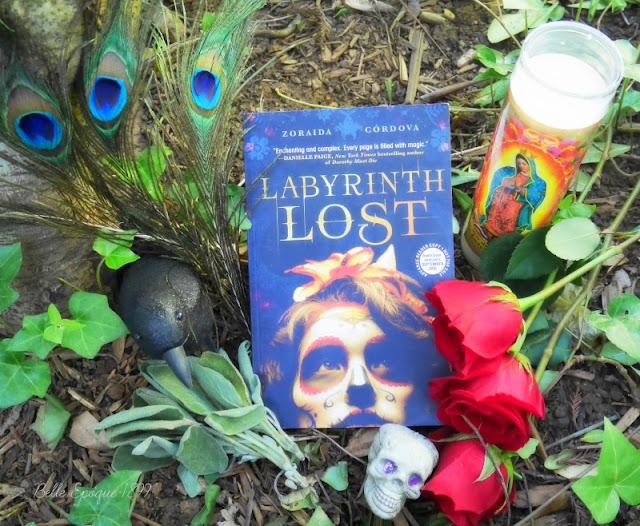 Nothing says Happy Birthday like summoning the spirits of your dead relatives.
I fall to my knees. Shattered glass, melted candles and the outline of scorched feathers are all that surround me. Every single person who was in my house – my entire family — is gone.
Alex is a bruja, the most powerful witch in a generation…and she hates magic. At her Deathday celebration, Alex performs a spell to rid herself of her power. But it backfires. Her whole family vanishes into thin air, leaving her alone with Nova, a brujo boy she can’t trust. A boy whose intentions are as dark as the strange markings on his skin.
The only way to get her family back is to travel with Nova to Los Lagos, a land in-between, as dark as Limbo and as strange as Wonderland…
Beautiful Creatures meets Daughter of Smoke and Bone with an infusion of Latin American tradition in this highly original fantasy adventure.

I had barely read a couple chapters of Labyrinth Lost when I felt an irresistible impulse to create the little tableau above. I felt excited, immersing myself in the world that Córdova has conjured up.  Reading it was a spicy, colorful breath of fresh air - it's like nothing else I've read in a long, long time.

The Latin American influences of El Dia de los Muertos and Santeria (as Córdova explains in her Author's Note) are what make Labyrinth Lost so vividly compelling. There are touches  here and there of Alice in Wonderland and even Dante's Inferno and Greek mythology, but Córdova has crafted a magical universe that is breathtaking in its uniqueness.  Add a Latina protagonist who's also bisexual and I don't even know where to start with how much I absolutely adore this book.

Alex is a reluctant encantrix whose strong and stubborn personality leads her to the dark and dangerous  world of Los Lagos to rescue her loved ones. Her journey, and this book, is foremost about family and how it is a powerful magic on its own. The romance(s) are subplots, secondary to Alex's magical coming of age.  The pulsing heart of the narrative is Alex's large, close knit family.

"I wonder what it's like in other households during breakfast.  Do their condiment shelves share space with jars of consecrated cemetery dirt and blue chicken feet?  Do their mothers pray to ancient gods before they leave for work every morning?  Do they keep the index finger bones of their ancestors in red velvet pouches to ward off thieves?

"I already know the answer is no.  This is my world.  Sometimes I wish it weren't."