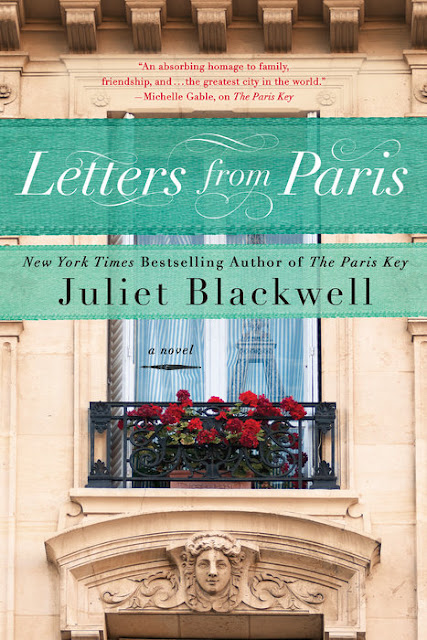 After surviving the accident that took her mother’s life, Claire Broussard has worked hard to escape her small Louisiana hometown. But these days she feels something is lacking. Abruptly leaving her lucrative job in Chicago, Claire returns home to care for her ailing grandmother. There, she unearths a beautiful piece of artwork that her great-grandfather sent home from Paris after World War II.

At her grandmother’s urging, Claire travels to Paris to track down the century-old mask-making atelier where the object, known only as “L’Inconnue”—or The Unknown Woman—was created. Under the watchful eye of a surly mask-maker, Claire discovers a cache of letters that offers insight into the life of the Belle Epoque woman immortalized in the work of art. As Claire explores the unknown woman’s tragic fate, she begins to unravel deeply buried secrets in her own life.

I positively inhaled this book.  Stayed up late to read it and woke up early to finish it before going to work. Letters from Paris has all the scintillating elements for an irresistible binge read - not one, but two mysteries connected by an intriguing piece of art, dual narratives of the present and distant past, colorful characters, mouthwatering descriptions of food, and ... to quote the main character, it's in Paris. Need I say more? But before the story moves to Paris, it spends some chapters in Louisiana, which I enjoyed as well. Blackwell has a gift for making her settings and characters (especially Mammaw) come uniquely alive.

Pleasing too is Blackwell's depiction of Paris as Claire first encounters it - too touristy and isolating, not the usual stereotype I was expecting.  Like some of the Parisian characters Claire meets, its charms and beauty slowly reveal themselves to her, all the more delicious to savor.

I had read about L'Inconnue before in one of the innumerable Parisian travelogues I devour.  I won't spoil it for the reader, just to say that it is a piece of art that has haunted many an imagination about its backstory. I adore Blackwell's rich and touching fictional interpretation of what if, which also ties in with Claire's tragic circumstances. Just when I thought I knew where it was going, the plot unfolded with surprises.

Letters from Paris is a satisfying delight.
Posted by Madame X at 8:00 AM