As far as celebrity cook/supermodel/Lip Sync Battle hostesses go - Chrissy Teigen is my favorite. If you've ever perused her tweets, Instagram posts and blog, you've seen how refreshingly down-to-earth and hilarious she is - not to mention a serious foodie.

This is the first recipe of hers I ever tried and was pretty impressed, both with how easy it was and how yummy. It's not a traditional Chinese wonton soup - more a spicy Thai version. 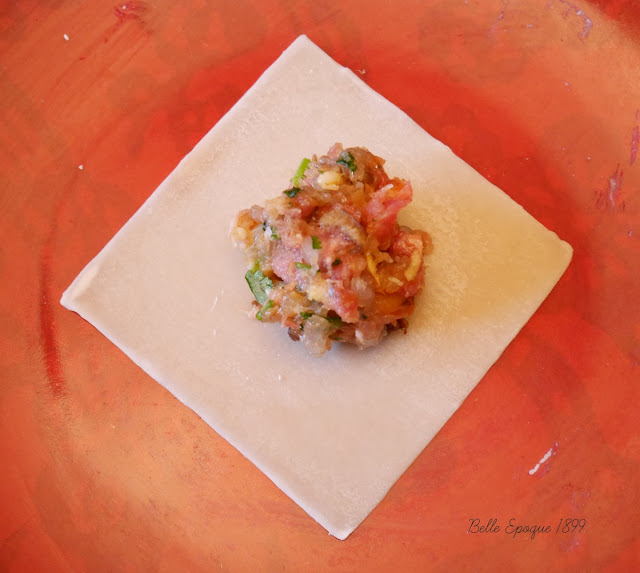 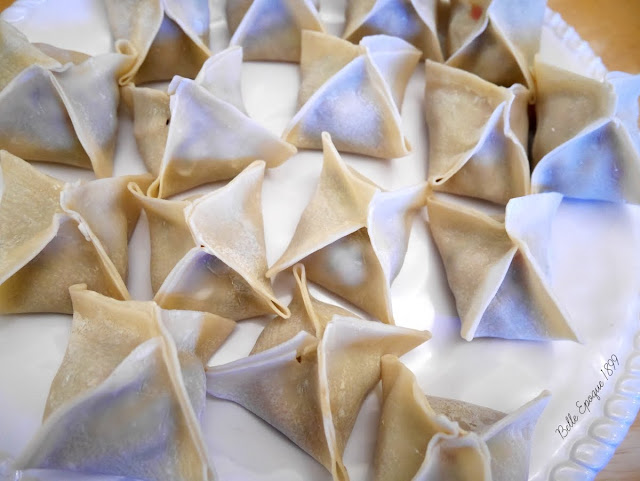 INGREDIENTS
Serves 6
8 cups low-sodium chicken broth
2 tablespoons fish sauce, divided
1/2 teaspoon chili flakes, divided
1/2 pound cleaned shrimp (no tails!)
1/2 pound ground pork
6 shiitake mushrooms, stemmed and finely minced
1/4 cup finely chopped cilantro, plus more leaves for garnish
4 cloves garlic, minced
1 tablespoon minced fresh ginger
1 tablespoon toasted sesame oil, divided
1 tablespoon Sriracha
1/2 teaspoon salt
6 large square (6 inch) egg roll wrappers
2 scallions, thinly sliced
1. Bring the chicken broth, 1 tablespoon of the fish sauce, and ¼ teaspoon of the chili flakes to a boil in a medium soup pot.
2.Finely chop the shrimp and gently combine them in a bowl with the pork, shiitakes, cilantro, garlic, the other tablespoon of fish sauce, the ginger, ½ tablespoon of the sesame oil, Sriracha, and salt until just incorporated (don’t manhandle the mixture!).
3. Working one or two at a time, place the egg roll wrappers on a clean surface (keep the rest of the wrappers covered with a kitchen towel). Using 1/3 cup filling, mold the filling into balls and put 1 ball in the middle of the wrapper.
4. Brush the edges of the wrapper with water and gather up the corners of the wrapper on top of the ball, sealing them in an orderly fashion at the seams (or smashing them together like a fool as long as they stick together).
5. Repeat with the remaining filling and wrappers.
6. Using a spider thingie, carefully put the dumplings into the simmering soup.
7. Cover the pot and simmer until the dumplings are cooked and the noodles look sort of see-through, 8-9 minutes. Gently lift each dumpling out of the pot into a soup bowl and cover it with broth. Garnish with scallions and cilantro.
Posted by Madame X at 8:00 AM