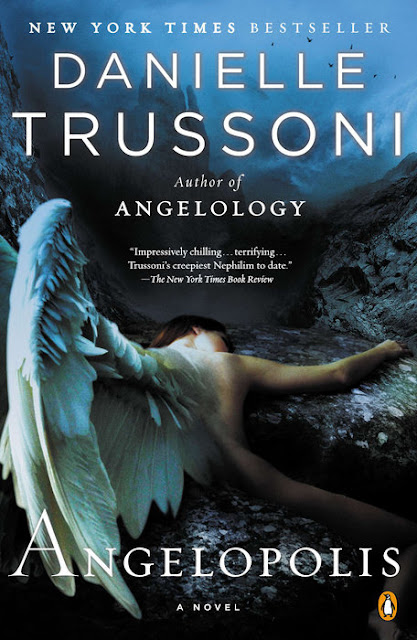 A New York Times bestseller and global sensation, Angelology unfurled a brilliant tapestry of myth and biblical lore on our present-day world and plunged two star-crossed heroes into an ancient battle against mankind’s greatest enemy: the fatally attractive angel-human hybrids known as the Nephilim. With Angelopolis, the conflict deepens into an inferno of danger and passion unbound.

A decade has passed since Verlaine saw Evangeline alight from the Brooklyn Bridge, the sight of her new wings a betrayal that haunts him still. Now an elite angel hunter for the Society of Angelology, he pursues his mission with single-minded devotion: to capture, imprison, and eliminate her kind.

But when Evangeline suddenly appears on a twilit Paris street, Verlaine finds her nature to be unlike any of the other creatures he so mercilessly pursues, casting him into a spiral of doubt and confusion that only grows when she is abducted before his eyes by a creature who has topped the society’s most-wanted list for more than a century. The ensuing chase drives Verlaine and his fellow angelologists from the shadows of the Eiffel Tower to the palaces of St. Petersburg and deep into the provinces of Siberia and the Black Sea coast, where the truth of Evangeline’s origins—as well as forces that could restore or annihilate them all—lie in wait.


Conceived against an astonishing fresh tableau of history and science, Angelopolis plumbs Russia’s imperial past, modern genetics, and ancient depictions of that most potent angelic appearance—the Annunciation of Gabriel—in a high-octane tale of abduction, treasure seeking, and divine warfare as the fate of humanity once again hangs in the balance.

Angelopolis was worth the looong wait BUT I'm afraid I'm the bearer of disturbing news - it ends in a cliffhanger. Yes, there is at least another book in the series, if not more. Not really sure at this point as the cliffie is of epic proportions. Oh, yes, it ends in jaw-dropping suspense.

In addition, if you were very attached to Evangeline in Angelology, then I'm afraid you will barely see her in the sequel. She is in two scenes, at least two where she is conscious. I'll leave that there so your imagination can whirl with possibilities. I will say one thing, if you thought she was too easily led and timid in the first book, there's a reason for that. And by the end of Angelopolis, you see that there's a glimmer of hope for her. A little fire, a little rebellion stirring, which hopefully will amount to something spectacular.

Most of Angelopolis is devoted to Verlaine and a few new angel hunters we haven't met before: Vera, Dr. Raphael Valko [Evangeline's grandfather (in name only, not the dead nephilim, Grigori)], and some Russians. Although the narrative alternates between two sets of angelologists, both storylines basically revolve around the Imperial Russian family, Faberge eggs, and Rasputin. It turns out the royal Russian family were Nephilim and the famed eggs had much more importance than as mere bejeweled baubles.

There is no lack of dazzling action or shocking revelations in Angelopolis. As in the first, historical and Biblical characters are intertwined with angel lore. It is shorter than its predecessor but more compact in plot. However, some of the scenes moved too fast. Often it seemed like a character would be in the middle, or on the verge, of something very exciting then fall unconscious only to wake up and the best parts happened off-scene. That happened towards the very end as well. Something of great significance developed but it was described in one sentence. A few times I was left wondering, okay, how exactly did that happen?

Plus, I felt cheated. Although the book is called Angelopolis, none of the story ever actually takes place there. As of the ending, the place is still as mythic and unknown as it was where the first book left off. Maybe in the next book???

Some irritation aside, I have no qualms in saying that Angelopolis only served to increase my fascination with this world of humans versus angels. I am truly breathless with anticipation in how it will all play out in next book.
Posted by Madame X at 8:00 AM