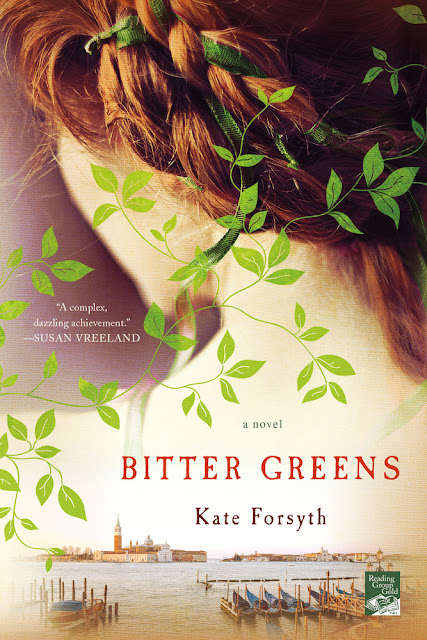 French novelist Charlotte-Rose de la Force has been banished from the court of Versailles by the Sun King, Louis XIV, after a series of scandalous love affairs. At the convent, she is comforted by an old nun, Sœur Seraphina, who tells her the tale of a young girl who, a hundred years earlier, is sold by her parents for a handful of bitter greens...

After Margherita's father steals parsley from the walled garden of the courtesan Selena Leonelli, he is threatened with having both hands cut off, unless he and his wife relinquish their precious little girl. Selena is the famous red-haired muse of the artist Tiziano, first painted by him in 1512 and still inspiring him at the time of his death. She is at the center of Renaissance life in Venice, a world of beauty and danger, seduction and betrayal, love and superstition.

Locked away in a tower, Margherita sings in the hope that someone will hear her. One day, a young man does.

Award-winning author Kate Forsyth braids together the stories of Margherita, Selena, and Charlotte-Rose, the woman who penned Rapunzel as we now know it, to create what is a sumptuous historical novel, an enchanting fairy tale retelling, and a loving tribute to the imagination of one remarkable woman.

I wasn't quite sure what I was getting with Bitter Greens other than it was a take on Rapunzel. The book first begins with the story of Charlotte-Rose de la Force, a French noblewoman who wrote the version of Rapunzel that we know today. As Forsyth tells it, Charlotte-Rose was a witty, intelligent and strong-willed woman who got punished by the King for being too forward and too outspoken. Her punishment: to be banished into a nunnery. The theme of Forsyth's depiction of Charlotte-Rose's rise and fall into disfavor is that she was a woman far ahead of her time. Women at the time were subject to the whims of men and had very little power of their own.

Forsyth intertwines this theme with the Rapunzel fairy tale, which Charlotte-Rose encounters for the first time in the convent, as told to her by a nun she befriends. At this point, Bitter Greens incorporates the tale of Margherita, an Italian Rapunzel, and then later on, the tale of La Strega, the witch who imprisons her in the tower. Surprisingly, La Strega's tale is the one I found most intriguing.

Charlotte-Rose's banishment into the convent has certain parallels to Margherita's imprisonment in the tower and what it takes to free one's self either physically or figuratively from the real or metaphorical chains.

Bitter Greens is historical fiction along the lines of Philippa Gregory novels, with a touch of fantasy/magic.

I was not as taken with the book as I had hoped to be. There is a jumping the shark turn of events which I found forced and unbelievable and also seemed to indicate that being imprisoned in a tower is good for women – it purges them of evil/wrongdoing.
Posted by Madame X at 8:00 AM 2 comments:

Book Review: The Beautiful Ones by Silvia Moreno-Garcia 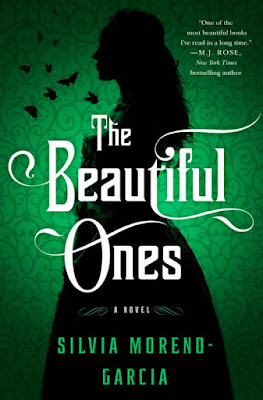 In a world of etiquette and polite masks, no one is who they seem to be.

Antonina Beaulieu is in the glittering city of Loisail for her first Grand Season, where she will attend balls and mingle among high society. Under the tutelage of the beautiful but cold Valérie Beaulieu, she hopes to find a suitable husband. However, the haphazard manifestations of Nina’s telekinetic powers make her the subject of malicious gossip.

Yet dazzling telekinetic performer and outsider Hector Auvray sees Nina’s powers as a gift, and he teaches her how to hone and control them. As they spend more and more time together, Nina falls in love and believes she’s found the great romance that she’s always dreamed of, but Hector’s courtship of Nina is deceptive.

The Beautiful Ones is a sweeping fantasy of manners set in a world inspired by the Belle Époque.

How could I not be drawn to this novel set in a fantasy Belle Epoque? The world Moreno-Garcia has created is darkly glimmering, peopled with aristocrats, some of whom have telekinetic powers, navigating the Grand Season. The trick is to let yourself sink in and be swept along by the author’s gorgeous writing. The fantasy aspect is more a tinge than an immersive experience, as the novel focuses more on the romantic crises of various hearts. I am intrigued enough by the author’s style that I will be exploring her other work.
Posted by Madame X at 8:00 AM No comments:

Book Review: Serafina and the Black Cloak by Robert Beatty 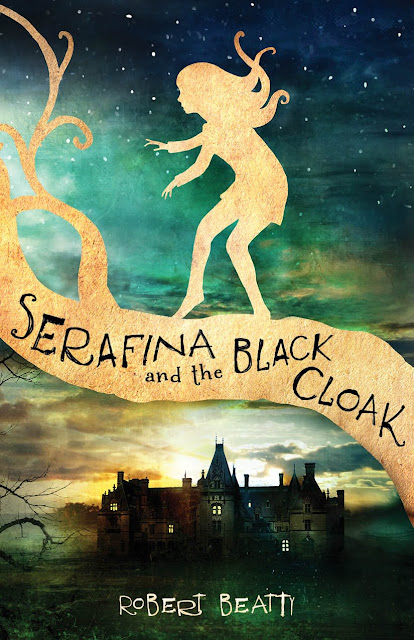 “Never go into the forest, for there are many dangers there, and they will ensnare your soul.”

Serafina has never had a reason to disobey her pa and venture beyond the grounds of Biltmore Estate. There’s plenty to explore in Mr. and Mrs. Vanderbilt’s vast and opulent home, but she must take care to never be seen. None of the rich folk upstairs know that Serafina exists; she and her pa, the estate’s maintenance man, have lived in the basement for as long as Serafina can remember. She has learned to prowl through the darkened corridors at night, to sneak and hide, using the mansion’s hidden doors and secret passageways.

But when children at the estate start disappearing, only Serafina knows the clues to follow. A terrifying man in a black cloak stalks Biltmore’s corridors at night. Following her own harrowing escape, Serafina risks everything by joining forces with Braeden Vanderbilt, the young nephew of Biltmore’s owners. Braeden and Serafina must uncover the Man in the Black Cloak’s true identity before all of the children vanish one by one.Serafina’s hunt leads her into the very forest that she has been taught to fear, where she discovers a forgotten legacy of magic. In order to save the children of Biltmore, Serafina must not only face her darkest enemy, but delve into the strange mystery of her own identity.

I was enchanted from the first chapter when Serafina describes hunting rats and living in the basement of the great Biltmore Estate. How could I not? As an adult, I laughed out loud, I was intrigued and turned the pages in eager anticipation of what was to happen next. I loved the character of Serafina - brave and different and quirky.

"If you meet someone face-to-face and they don't hiss at you and bite you, does that mean you're friends?"

I also grew to be entranced by the setting of the story, Biltmore Estate. Beatty's descriptions of it stirred my imagination so that I have put North Carolina as a must-visit destination in the near future.

In the golden light of the setting sun, the mansion really could be startlingly lovely. But as the sun withdrew its brightness behind the surrounding mountains, it cast ominous shadows across the estate, which reminded her of griffins, chimeras and other twisted creatures of the night that were half one thing and half another. The thought of it gave her a shudder. In one moment, the estate was the most beautiful home you had ever seen, but in the next, it was a dark and foreboding haunted castle."

Serafina is an excellent middle grade mystery with a touch of the supernatural. It's intelligent and unique - I was genuinely surprised by the twists and turns of the narrative and my heart beat quickly in quite a few scary scenes.
Posted by Madame X at 7:30 AM 2 comments: 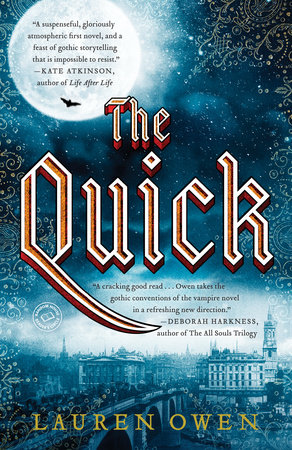 1892: James Norbury, a shy would-be poet newly down from Oxford, finds lodging with a charming young aristocrat. Through this new friendship, he is introduced to the drawing-rooms of high society and finds love in an unexpected quarter. Then, suddenly, he vanishes without a trace. Alarmed, his sister, Charlotte, sets out from their crumbling country estate determined to find him. In the sinister, labyrinthine London that greets her, she uncovers a hidden, supernatural city populated by unforgettable characters: a female rope walker turned vigilante, a street urchin with a deadly secret, and the chilling “Doctor Knife.” But the answer to her brother’s disappearance ultimately lies within the doors of the exclusive, secretive Aegolius Club, whose predatory members include the most ambitious, and most bloodthirsty, men in England.

I raced through this book in two days. I read it before going to work, during my breaks, during my lunch, after work. When I wasn't reading it, I thought about it. Do yourself a favor - settle into the first 102 pages, which are lyrical, sumptuously gothic, and contain a wistful love story. It is slower paced than the rest of the book, but nevertheless immersed me into the character of James and the Victorian London setting. Let the novel's subtle seduction work on you ... and then, prepare yourself for a thrilling pageturner of a ride. Believe me, you won't even have time to breathe. As subtle and gentlemanly as the first 100 pages are, the next 400 or so will escalate into true literary horror - until the very last breathless page, which left me in utter shock.

SPOILER - I only read the synopsis and the blurbs before deciding to read this book so I had no idea what was in store for me, only that I was open to whatever lay inside. James's and Christopher's secret love affair is beautifully rendered. I had to wonder though, whether the author was using vampirism as a metaphor for homosexual love in the Victorian era. As a child, James is accidentally locked into a secret hideaway in the library (closet-like), which again becomes significant much later on. James and Christopher's relationship is so shameful, they do not even say what they are out loud. Similarly, the word "vampire" is mentioned perhaps three times within the entire 523 pages and multiple characters take pains not to say it, as though to just to acknowledge vampires' existence is taboo. There is a theme of shameful secrets to be kept hidden, as well as never vocalized, linking homosexuality and vampirism. Both are forced to stay "in the closet" even until the end.
Posted by Madame X at 7:30 AM 1 comment: