Book Review: A Guide for Murdered Children by Sarah Sparrow 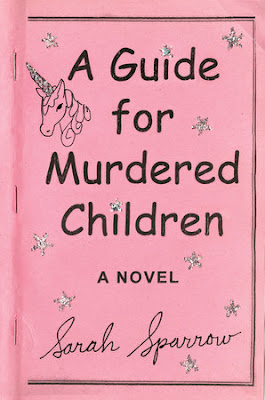 We’ve heard it said that there is no justice in this world. But what if there really was? What if the souls of murdered children were able to briefly return, inhabit adult bodies and wreak revenge on the monstrous killers who stole their lives?

Such is the unthinkable mystery confronting ex-NYPD detective Willow Wylde, fresh out of rehab and finally able to find a job running a Cold Case squad in suburban Detroit. When the two rookie cops assigned to him take an obsessive interest in a decades-old disappearance of a brother and sister, Willow begins to suspect something out of the ordinary is afoot. And when he uncovers a series of church basement AA-type meetings made up of the slain innocents, a new way of looking at life, death, murder—and missed opportunities—is revealed to him.

I was immediately drawn to the wild and ingenious premise of this novel, made even more intriguing in contrast to the delightful cover. When I began, I was instantly reminded of Jonathan Lethem in the sharp, shocking writing style and the gritty horror mood. As the novel progressed, the author’s own style emerged distinct. However, I struggled to keep track of the panoply of characters - murdered children, their “landlords”, the rather unsympathetic detective. But there is payoff in the end. There is just something so satisfying about murdered children exacting revenge on their killers/abusers. 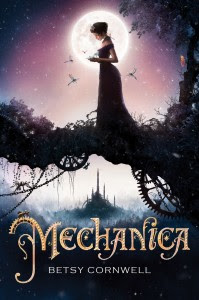 Nicolette’s awful stepsisters call her “Mechanica” to demean her, but the nickname fits: she learned to be an inventor at her mother’s knee. Her mom is gone now, though, and the Steps have turned her into a servant in her own home. When she discovers a secret workshop in the cellar on her sixteenth birthday—and befriends Jules, a tiny magical metal horse—Nicolette starts to imagine a new life for herself. The timing may be perfect: there’s a technological exposition and a royal ball on the horizon. Gorgeous prose and themes of social justice and family shine in this richly imagined Cinderella retelling about an indomitable inventor who finds her prince . . . but realizes she doesn’t want a fairy tale happy ending after all.

I was of course drawn to the gorgeous cover of Mechanica and the promise of a steampunk Cinderella retelling, but the first time I tried reading I must not have been in the right mood because I did not continued past the first few pages. But in the spirit of giving promising things a second chance, I returned and I'm very pleased that I did.  I loved most the passages describing Nicolette's mechanical inventions. I delighted in Cornwell's subversion of the traditional fairy tale trajectory, giving this fairy tale a feminist revision. In fact, I delighted in the world-building and writing as a whole.  So glad I gave this book another look!
Posted by Madame X at 8:00 AM 1 comment: 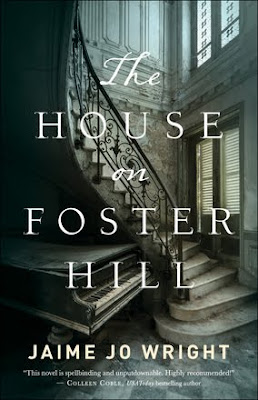 Kaine Prescott is no stranger to death. When her husband died two years ago, her pleas for further investigation into his suspicious demise fell on deaf ears. In desperate need of a fresh start, Kaine purchases an old house sight unseen in her grandfather's Wisconsin hometown. But one look at the eerie, abandoned house immediately leaves her questioning her rash decision. And when the house's dark history comes back with a vengeance, Kaine is forced to face the terrifying realization she has nowhere left to hide.

A century earlier, the house on Foster Hill holds nothing but painful memories for Ivy Thorpe. When an unidentified woman is found dead on the property, Ivy is compelled to discover her identity. Ivy's search leads her into dangerous waters, resurrecting painful memories and forcing a reunion with the man who broke her heart. Can Ivy unravel the mystery and find a renewed hope before any other lives--including her own--are lost?

The House on Foster Hill employs dual timelines – one in the present day with Kaine and the second in turn-of-the-century with Ivy. Both women are wrestling with dangerous events in their own time, all somehow connected by the house on Foster Hill.  When the novel opens, Ivy is at the scene when a girl’s murdered body has just been found.  In the present, Kaine is fleeing a stalker and has purchased the old house to renovate and perhaps open as a bed and breakfast.  How the two characters intertwine and the sinister mysteries that engulf them both take some time to be revealed, as it is not a fast-paced plot.  The suspense is strongly flavored with romance, as well as Christian overtones. 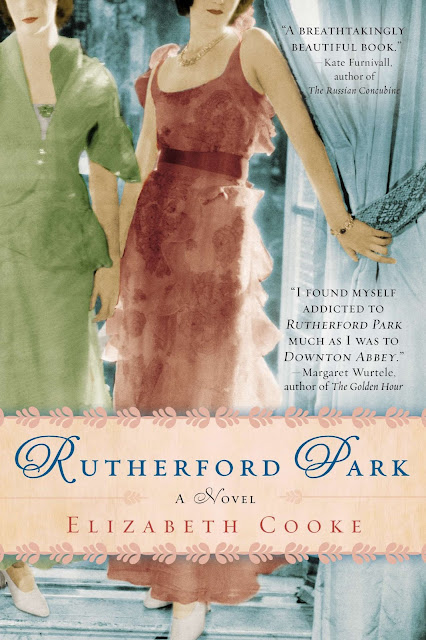 Snow had fallen in the night, and now the great house, standing at the head of the valley, seemed like a five-hundred-year old ship sailing in a white ocean…

For the Cavendish family, Rutherford Park is much more than a place to call home. It is a way of life marked by rigid rules and lavish rewards, governed by unspoken desires…

Lady of the house Octavia Cavendish lives like a bird in a gilded cage. With her family’s fortune, her husband, William, has made significant additions to the estate, but he too feels bound—by the obligations of his title as well as his vows. Their son, Harry, is expected to follow in his footsteps, but the boy has dreams of his own, like pursuing the new adventure of aerial flight. Meanwhile, below stairs, a housemaid named Emily holds a secret that could undo the Cavendish name.

On Christmas Eve 1913, Octavia catches a glimpse of her husband in an intimate moment with his beautiful and scandalous distant cousin. She then spies the housemaid Emily out in the snow, walking toward the river, about to make her own secret known to the world. As the clouds of war gather on the horizon, an epic tale of longing and betrayal is about to unfold at Rutherford Park…

I was reading through a few books inspired by, or similar to Downton Abbey when I came upon Rutherford Park.  I wasn't expecting much because the previous novels were definitely of the derivative kind. But from the first chapter on, I knew Rutherford Park was going to be different. It was excellent through and through, often surprising me with where it was going and how the author chose to portray the characters. They are fully fleshed out and more complex than I had expected. As good as Downton Abbey? Maybe even better...
Posted by Madame X at 8:00 AM 1 comment:

Book Review: L'Appart: The Delights and Disasters of Making My Paris Home by David Lebovitz 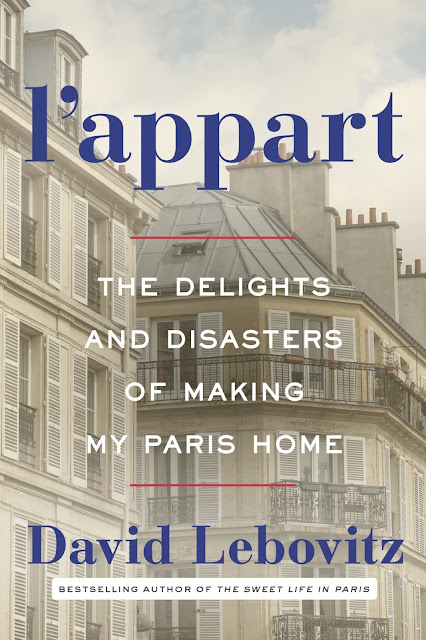 L'Appart: The Delights and Disasters of Making My Paris Home by David Lebovitz

Bestselling author and world-renowned chef David Lebovitz continues to mine the rich subject of his evolving ex-Pat life in Paris, using his perplexing experiences in apartment renovation as a launching point for stories about French culture, food, and what it means to revamp one’s life. Includes dozens of new recipes.

When David Lebovitz began the project of updating his apartment in his adopted home city, he never imagined he would encounter so much inexplicable red tape while contending with the famously inconsistent European work ethic and hours. Lebovitz maintains his distinctive sense of humor with the help of his partner Romain, peppering this renovation story with recipes from his Paris kitchen. In the midst of it all, he reveals the adventure that accompanies carving out a place for yourself in a foreign country—under baffling conditions—while never losing sight of the magic that inspired him to move to the City of Light many years ago, and to truly make his home there.

Reading The Sweet Life made me not want to ever move to Paris and L'Appart induced the same feeling - at the very least not to ever buy and renovate an apartment there. L'Appart had me gasping in appalled disbelief at Lebovitz's real estate and remodeling horror stories.  Just when I thought it couldn't get worse - it did!  Again and again.

It emphasizes what I already knew- which is that the French have a baffling way of doing things. However, this time around, despite my horror at Lebovitz's travails, I devoured all his tales of woe eagerly. I am in the middle of a house makeover of my own and Lebovitz's descriptions of his perfect Parisian kitchen, down to the cabinets and the farmhouse sink are vastly intriguing.  As are the recipes. Each chapter ends with a recipe to soothe any vicarious anxieties.

"When I started looking at apartments, I'd also said to myself, I don't want to buy an apartment that I have to do any work in.  That was wishful thinking  There isn't an apartment in Paris that isn't in need of some sort of work.  You don't even need to look deeply to see what needs to be done.  Minerals from the calcified water clogs pipes and leaves a heavy, impenetrable crust around the joints. Serpillieres (tattered floor rags) are laid out on kitchen floors and in bathrooms to sop up the water that sprays from ancient faucets and showerheads... Walls in older places may be stained nicotine yellow and dark rooms are not brightened by low-wattage wall sconces with burn marks surrounding the holes where the rusty wires lead into the plaster wall. All the gray hair I've acquired since moving to France isn't from frustration with the bureaucracy, but from plugging my stand mixer into the wall and getting zapped by a jolt of ungrounded electricity."
Posted by Madame X at 8:00 AM 1 comment: