Book Review: Men Explain Things to Me by Rebecca Solnit 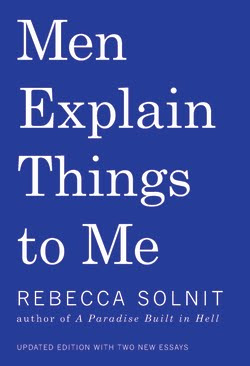 In her comic, scathing essay, "Men Explain Things to Me," Rebecca Solnit took on what often goes wrong in conversations between men and women. She wrote about men who wrongly assume they know things and wrongly assume women don't, about why this arises, and how this aspect of the gender wars works, airing some of her own hilariously awful encounters.

This updated edition with two new essays of this national bestseller book features that now-classic essay as well as "#YesAllWomen," an essay written in response to 2014 Isla Vista killings and the grassroots movement that arose with it to end violence against women and misogyny, and the essay "Cassandra Syndrome." This book is also available in hardcover.

Writer, historian, and activist Rebecca Solnit is the author of eighteen or so books on feminism, western and indigenous history, popular power, social change and insurrection, wandering and walking, hope and disaster, including the books Men Explain Things to Me and Hope in the Dark, both also with Haymarket; a trilogy of atlases of American cities; The Faraway Nearby; A Paradise Built in Hell: The Extraordinary Communities that Arise in Disaster; A Field Guide to Getting Lost; Wanderlust: A History of Walking; and River of Shadows, Eadweard Muybridge and the Technological Wild West (for which she received a Guggenheim, the National Book Critics Circle Award in criticism, and the Lannan Literary Award). A product of the California public education system from kindergarten to graduate school, she is a columnist at Harper's and a regular contributor to the Guardian.

When I was at dinner recently with my family, my niece and I started talking about books we’re currently reading, as we usually do. I briefly talked about this book and she said, “You mean mansplaining?”  And she proceeded to tell me how a boy in her class, unprovoked, tried to explain an assignment to her which she already understood.

I doubt there is a woman who would read this book and not start nodding along in the first chapter when Solnit is at a dinner party and a prominent, wealthy man asks her what she does, then cuts her off mid-sentence to start telling her about a very important book she should read, which her friend tries and fails 3 times to tell him is a book Solnit wrote. The man pales when he at last realizes his gaffe but stumbles along in conversation, unwilling to admit his mistake.

I have had “men explain things to me,” and like Solnit, I politely listened and bit back retorts so that I wouldn’t embarrass whomever it was who was lecturing me. I have no fear of asking about a subject I’m genuinely curious and/or unfamiliar with, but like others, I hate having to endure an unwanted explanation just so a man can feel powerful and smart.

Solnit draws a connection from “mansplaining” to misogyny to violence against women in subsequent essays in the book. There are additional essays that are not as strong. The Virginia Woolf one basically made my eyes glaze over, as I started feeling like it was a reading assignment for one of my college English classes.

I told my 12-year-old niece that when she’s older she should read this book. Some of it is scary – scary enough to me anyway. Harassment, violence – all goes hand in hand with roots of “mansplaining.” At 12, she’s already been subjected to its more benign scenarios but I don’t want her to have fear of living her life boldly and asserting herself.

“There are other things I’d rather write about, but this affects everything else. The lives of half of humanity are still dogged by, drained by, and sometimes ended by this pervasive variety of violence.  Think of how much more time and energy we would have to focus on other things that matter if we weren’t so busy surviving. Look at it this way: one of the best journalists I know is afraid to walk home at night in our neighborhood. Should she stop working late?  How many women have had to stop doing their work, or been stopped from doing it, for similar reasons?”
Posted by Madame X at 7:00 AM