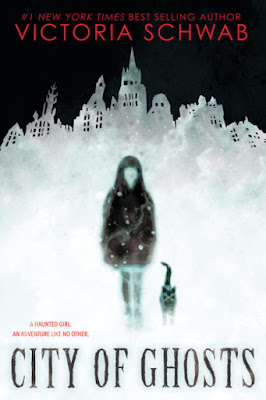 Cassidy Blake's parents are The Inspecters, a (somewhat inept) ghost-hunting team. But Cass herself can really see ghosts. In fact, her best friend, Jacob, just happens to be one.

When The Inspecters head to ultra-haunted Edinburgh, Scotland, for their new TV show, Cass and Jacob come along. In Scotland, Cass is surrounded by ghosts, not all of them friendly. Then she meets Lara, a girl who can also see the dead. But Lara tells Cassidy that as an In-betweener, their job is to send ghosts permanently beyond the Veil.

Cass isn't sure about her new mission, but she does know the sinister Red Raven haunting the city doesn't belong in her world. Cassidy's powers will draw her into an epic fight that stretches through the worlds of the living and the dead, in order to save herself.

How cool is it that Schwab set part of this novel in Edinburgh and somehow worked in the cafe where J.K. Rowling wrote Harry Potter and Greyfriars Cemetery where Rowling got inspiration for some of the characters?! I made a special Harry Potter pilgrimage to Edinburgh a couple years ago so I could clearly picture the places mentioned and described.

But aside from this connection -I especially enjoyed Cass and Jacob's friendship and interaction.  Even though she's alive ... and he's not.  I also liked Cass's quirky ghost-hunting parents. The story moved fast, especially when the setting changed to Scotland and Cass makes a friend, as well as frightening spectral enemy called the Raven in Red.

Ghosts, mysteries and chills - City of Ghosts is an engaging middle grade fantasy that this adult enjoyed. I'm sure the 7-11 year olds will enjoy as well
Posted by Madame X at 7:00 AM