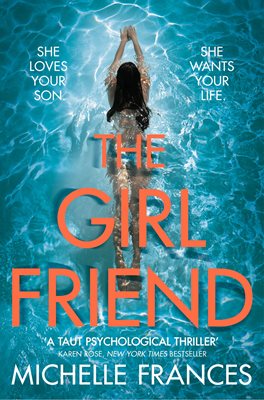 She loves your son. She wants your life. How far would you go to protect your son?

Laura has it all. A successful career, a long marriage to a rich husband, and a twenty-three year-old son, Daniel, who is kind, handsome, and talented. Then Daniel meets Cherry. Cherry is young, beautiful and smart but hasn’t led Laura’s golden life. And she wants it.

When tragedy strikes, a decision is made and a lie is told. A lie so terrible it changes their lives forever . . .

No matter how terrible your relationship with your in-law is, I will bet anything that it will look downright pleasant compared to what happens in The Girlfriend. Things start out promisingly for Cherry, Daniel and Laura and then somehow things snowball from bad to worse to yikes!  Neither Cherry nor Laura end up looking great. Both do some things that are unforgivable. But one definitely gets the off-the-charts-psycho-crazy crown. And Daniel certainly seems clueless, torn between his mother and Cherry.  One thing I couldn't become convinced of is how fast and hard Daniel fell for Cherry. There seemed to be nothing special in their interactions that would warrant how seriously their relationship evolved. But despite this disbelief, I was hooked and quickly read The Girlfriend, wanting to see what crazy development happens next.

Book Review: How to Stop Time by Matt Haig 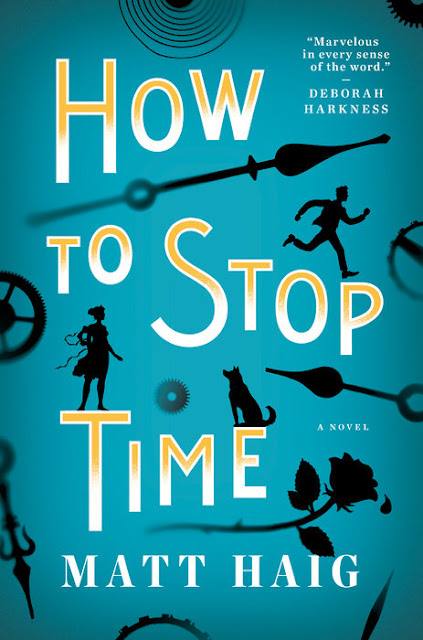 Tom Hazard has just moved back to London, his old home, to settle down and become a high school history teacher. And on his first day at school, he meets a captivating French teacher at his school who seems fascinated by him. But Tom has a dangerous secret. He may look like an ordinary 41-year-old, but owing to a rare condition, he’s been alive for centuries. Tom has lived history–performing with Shakespeare, exploring the high seas with Captain Cook, and sharing cocktails with Fitzgerald. Now, he just wants an ordinary life.

Unfortunately for Tom, the Albatross Society, the secretive group which protects people like Tom, has one rule: Never fall in love. As painful memories of his past and the erratic behavior of the Society’s watchful leader threaten to derail his new life and romance, the one thing he can’t have just happens to be the one thing that might save him. Tom will have to decide once and for all whether to remain stuck in the past, or finally begin living in the present.

The Age of Adeline, but with Shakespeare and F. Scott Fitzgerald. Okay, our protagonist actually ages, unlike Adeline - but very, very slowly, about a decade for every century.  Not bad, right? There is no magical component to Tom's "agelessness," but a medical condition which is the opposite of the better known progeria (which is an abnormally advanced rate of aging).

Like The Age of Adeline, Tom has to deal with the dangers and curse of seemingly never aging. In the 1700s, he is accused of black magic - although appearing to be fourteen when you're really eighteen doesn't seem that alarming or noticeable to me. Appearing to be fourteen for a decade would.  (This was my problem with the movie as well.) I think moving and assuming a new identity every 8 years seems a bit much. But then I live in a time when almost 60-year-olds like Madonna retain the appearance of youth through botox, plastic surgery, and clean living.  I suppose in the olden days people aged much faster and so moving every 8 years might have been smart.

As to the name-dropping - I just had to scoff every time someone famous (and male) entered the narrative.  Not everybody who lived in 1700s London met Shakespeare. Not everyone in 1920s Paris drank with Fitzgerald. I suppose that's what I appreciated about The Age of Adeline - as it dealt with an otherwise normal human being trying to live discreetly as she outwardly retains a 29-year-old appearance for 80 years.

"You are, of course, allowed to love food and music and champagne and rare sunny afternoons in October.  You can love the sight of waterfalls and the smell of old books, but the love of people is off limits... Don't attach yourself to people and try to feel as little as you possibly can for those you do meet. Because otherwise you will slowly lose your mind."

I also was not convinced of Tom's modern romantic situation - not enough there to make me believe his 400-year-old heart will suddenly be rejuvenated.

So far, if you're keeping count, I was far more taken with The Age of Adeline than How to Stop Time. However, the book has an ace up its sleeve in the form of the handsome Benedict Cumberbatch.  Yes, it's going to be a movie folks.  I'm more than curious to see how this translates on film and will definitely go see it.
Posted by Madame X at 7:00 AM No comments: 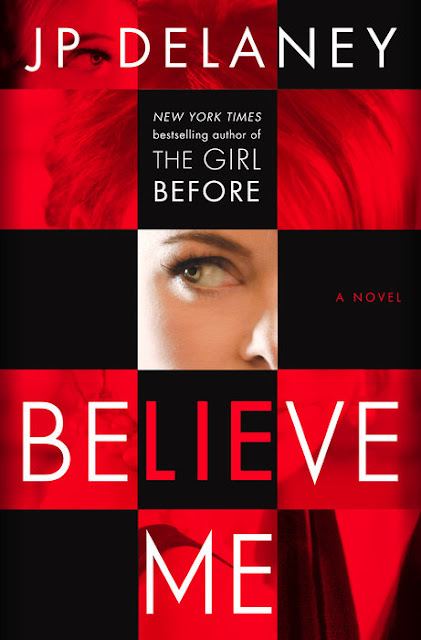 A struggling actor, a Brit in America without a green card, Claire needs work and money to survive. Then she gets both. But nothing like she expected.

Claire agrees to become a decoy for a firm of divorce lawyers. Hired to entrap straying husbands, she must catch them on tape with their seductive propositions.

The rules? Never hit on the mark directly. Make it clear you’re available, but he has to proposition you, not the other way around. The firm is after evidence, not coercion. The innocent have nothing to hide.

Then the game changes.

When the wife of one of Claire’s targets is violently murdered, the cops are sure the husband is to blame. Desperate to catch him before he kills again, they enlist Claire to lure him into a confession.

Claire can do this. She’s brilliant at assuming a voice and an identity. For a woman who’s mastered the art of manipulation, how difficult could it be to tempt a killer into a trap?

I have been reading so many psychological thrillers lately that I’ve started seeing some of the same tropes repeated (you have no idea how many times twins ends up being the twist) and nothing seems fresh anymore. It was going to take quite some doing to surprise me – and believe it or not, Believe Me managed to do just that. (Spoiler alert - No twins here!)

I wasn’t planning on reading this book in one sitting, but from the first page, I was completely immersed and had to drop everything to continue until the end.  I thought the story was going one way, only for it to reverse, then turn upside down and sideways until I didn’t know what to think – except for one thing, which is to hang on for the ride. And a wild ride it is. I guarantee you are going to say WTF?! at least a couple times (in a good way) and then thumb back towards prior chapters/scenes just to realize, yep, it actually went there.

Let’s talk about style for a second – at times the narrative was told in script format (like a play or movie script) which I thought at first was just a gimmick because Claire is a struggling actress. But since I’m mentioning it here, you know it isn’t a throwaway detail.

Now let’s talk about substance. I loved how Delaney wove in Charles Baudelaire’s The Flowers of Evil and Baudelaire’s personal life as an integral part of how the story unfolds. This touch elevated Believe Me into another realm and made me want to revisit Baudelaire’s poems and read more about his life. Someone should stage My Heart Laid Bare – please!!!

I have more memories than if I had lived a thousand years.
An old desk full of dead ideas
Is not more full of secrets than my aching head…

It’s a necropolis; a grave in which the dead-
Those bodies I once loved – are tumbled willy-nilly,
Prodded and nudged incessantly
By morbid reveries, like worms. 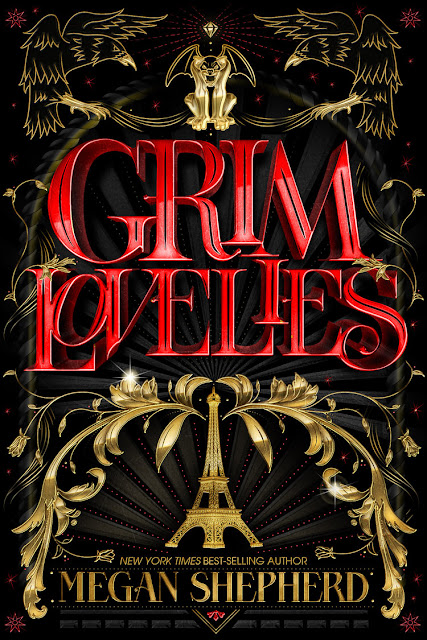 Seventeen-year-old Anouk envies the human world, where people known as Pretties lavish themselves in fast cars, high fashion, and have the freedom to fall in love. But Anouk can never have those things, because she is not really human. Enchanted from animal to human girl and forbidden to venture beyond her familiar Parisian prison, Anouk is a Beastie: destined for a life surrounded by dust bunnies and cinders serving Mada Vittora, the evil witch who spelled her into existence. That is, until one day she finds her mistress murdered in a pool of blood—and Anouk is accused of the crime.

Now, the world she always dreamed of is rife with danger. Pursued through Paris by the underground magical society known as the Haute, Anouk and her fellow Beasties only have three days to find the real killer before the spell keeping them human fades away. If they fail, they will lose the only lives they’ve ever known…but if they succeed, they could be more powerful than anyone ever bargained for.

Grim Lovelies bewitched me from the first page to the last. I love everything about this book –starting with the decadent black and red cover which perfectly embodies everything inside its pages:

“The more she saw of Paris, the more dreamlike it was; she wasn’t sure where the streetlights ended and the stars began.”

Grim Lovelies married two of my reading loves: Paris and rich fantasy.  Shepherd’s worldbuilding – of a magical Paris alongside an unsuspecting human one – is intricate. I willingly fell under its spell.  Once I started reading, I didn’t want to stop, eager to experience whatever strange and beautiful/repulsive surprise she had in store. Besides the storytelling, I loved the inclusion of gay and transgender fairy tale themes which made the narrative all the richer.

I cannot wait for the sequel … The Gargoyle Witch???

“’Monsters! Oh come, don’t look surprised. Nothing good is ever created from magic. You were made to be the most terrifying thing in the known world.’”
Posted by Madame X at 7:00 AM No comments: