Book Review: In the Night Wood by Dale Bailey 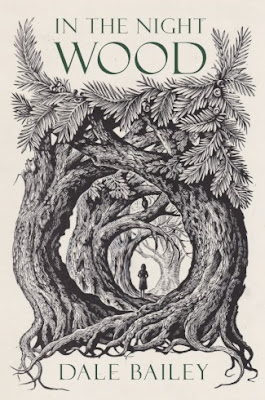 Failed father, failed husband, and failed scholar, Charles Hayden hopes to put his life back together with a new project: a biography of Caedmon Hollow, the long-dead author of a legendary Victorian children’s book, In the Night Wood, and forebear of his wife, Erin. Deep in mourning from the loss of their young daughter, they pack up their American lives, Erin gives up her legal practice, and the couple settles in Hollow’s remote Yorkshire mansion.

In the neighboring village, Charles meets a woman he might have loved, a child who could have been his own daughter, and the ghost of a self he hoped to bury. Erin, paralyzed by her grief, immerses herself in pills and painting images of a horned terror in the woods.

In the primeval forest surrounding Caedmon Hollow’s ancestral home, an ancient power is stirring, a long-forgotten king who haunts the Haydens’ dreams. And every morning the fringe of darkling trees presses closer.

Soon enough, Charles and Erin will venture into the night wood.

Soon enough, they’ll learn that the darkness under the trees is but a shadow of the darkness that waits inside us all.

In the Night Wood starts out auspiciously enough (after some telling epigraphs and a prologue) - with our young hero alone in the library of a great estate and finding a very special book.

"The supple leather boards were embossed with some kind complex design. He studied it, mapping the pattern - a labyrinth of ridges and whorls - with the ball of his thumb. Then he opened the book. The frontispiece echoed the motif inscribed on the cover; here he could see it clearly, a stylized forest scene: gnarled trees with serpentine roots and branches twining about one another in sinuous profusion. Twisted, and bearded with lichen, the trees projected an oddly menacing aura of sentience - branches like clutching fingers, a hollow like a screaming mouth. Strange faces, seemingly chance intersections of leaf and bough, peered out at him from the foliage: a grinning serpent, a malevolent cat, an owl with the face of a frightened child."

If this passage does not seduce you like it did me, then there is no hope for you. It represents the dark gothic fairy tale style of In the Night Wood. If this were a children's story, the hero would then be transported into an adventure upon the opening of this extraordinary book. But because this is adult fiction, the boy instead grows up into a "failed" man who suffers a grievous loss. Only then because of his mourning and guilt, does he venture into the Night Wood. By this time, the reader has come to understand that the wood is a metaphor for the landscape of his soul. Also, that the author wants the reader to be aware of Story, with a capital S, as he iterates "Once upon a time" several times and actually begins the novel with a discussion of the purpose of fairy tales as though this were the beginning of an essay. Rather than get lost in the story, as I prefer to when reading, I was made constantly aware of Metaphor.
Posted by Madame X at 8:00 AM