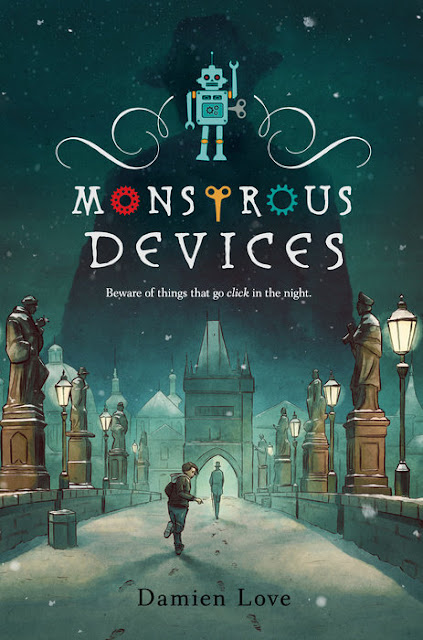 On a winter’s day in a British town, twelve-year old Alex receives a package in the mail: an old tin robot from his grandfather. “This one is special,” says the enclosed note, and when strange events start occurring around him, Alex suspects this small toy is more than special; it might be deadly.

Right as things get out of hand, Alex’s grandfather arrives, pulling him away from an attack—and his otherwise humdrum world of friends, bullies, and homework—and into the macabre magic of an ancient family feud. Together, the duo flees across snowy Europe, unraveling the riddle of the little robot while trying to outwit relentless assassins of the human and mechanical kind.

With an ever-present admiration for the hidden mysteries of our world, Monstrous Devices plunges readers into a gripping adventure that’s sure to surprise.

From the first page on - this fast-moving middle grade novel will leave you exhilarated and fascinated. As an adult, I found some scenes to be heart-palpitating, with diminutive assassins and those monstrous robots.  From Prague to Paris, Alex and his sly and secretive grandfather race to discover the secret of these devices - which involves an old Jewish legend of the golem.  I was delighted by Love's evocative descriptions of his various settings and thrilled by twists and turns of the narrative.  I was at once charmed by Alex's witty silver fox of a grandfather but frustrated because he was so close-mouthed about everything that was happening to Alex, even when he was clearly in danger.  The novel ends with questions left unanswered, paving the way for a sequel(s).

"The toy stood about five inches tall and was wonderfully grotesque.  Angry and pathetic-looking, it was made from a cheap, thin gray-green tin, with a bulky torso resembling and ancient boiler, held together with tiny rivets.  Little dials were painted on its chest, as if it ran on steam.  It grimaced with a mouth like a tiny letterbox, filled with a jagged nightmare of ferocious metal teeth.  It eyes were two holes, framing a hollow interior blackness."
Posted by Madame X at 8:00 AM