How to Use the Bangkok Metro for Sightseeing

I only had a taste of Bangkok’s traffic congestion before I made a vow to use every means at my disposal to avoid sitting in traffic.  One of those means is Bangkok’s metro, which is comprised of three separate systems. One of them is called the BTS, which is Bangkok skytrain, a metro system that has routes above the city. The other is the MRT. And the third one is the ARL, which is the airport link, used primarily To travel to and from the airport. 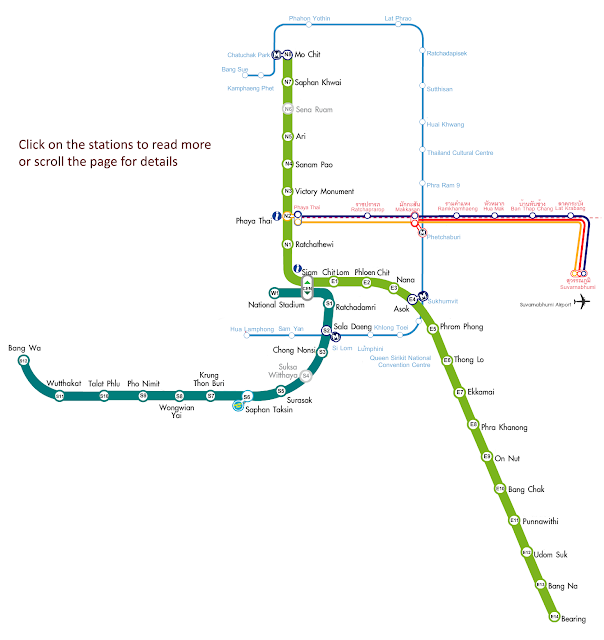 During my three days in Bangkok I used the metro system, sometimes in conjunction with the public ferry system, every single day, even for my day trip to Ayutthaya.

The metro system is only useful if your hotel is in the following areas: Silom, Sukhumvit, Siam.  I chose my hotel in the Sukhumvit  area partially because their website stated that it was 5 to 10 minutes walk from a BTS sky train stop.  This was incredibly useful to me. I was able to go to all of Bangkok’s  top sites, as well as to the Hua Lampang train station for my day trip to Ayutthaya, in addition to going to the airport for my flight to Hat Yai.

If this is your first time in Bangkok, you’ll likely be going to the following sites: Wat Arun, grand Palace, what pho and Chinatown.  The fastest way to get to these sites will involve using the public ferry system, in addition to the metro. Please see my blog post about how to use the Bangkok ferry system. 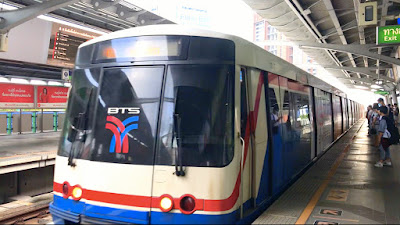 The metro stations are modern, sleek and on par with subway systems in New York and Paris and London. Although the metro system doesn’t cover the entirety of Bangkok, it is still a fast and inexpensive way to get from point to point.

The subway cars are clean and air conditioned.  All signage is in English and Thai, ideal for tourists. I never got lost. All announcements for upcoming stops are also in English and in Thai.  As with other metro systems, to figure out which train to take, first determine the direction you are going. That means the last station on that line signifies which direction you want.

If you’re going to be in Bangkok for at least a couple of days I suggest buying a rabbit card you have to purchase it from a station office it is 100 baht to buy the card and with a minimum hundred baht worth of rides so the minimum that you can purchase is 200 baht total. You can always add more rides as you go along. For three days in Bangkok, including a day trip to Ayutthaya and a one-way trip to the airport, I used almost 400 baht worth of trips .

To use the rabbit card, just tap it on the turnstile to enter the station and it will briefly flash how much money you have left on your card on the screen and then it will let uou in.  You again have to top your rabbit card on the turnstile to exit the station. At that time it will tell you the screen how much money you have left in your card.

You can also buy individual tickets for each trip.  But I found that having a rabbit card was the fastest way.

The rabbit card only works for at the Skytrain. Although the sky train has an app for your phone, you can only purchase or put money on the card by going up to the window available at any and every station.

If you want to go to an area that’s only accessible by the MRT, or if you want to reach the Hua Lamphong train station, you’re going to have to use the MRT.  The MRT does not use the rabbit card.  To transfer from Skytrain to the MRT you were going to have to go to a window at the MRT station and purchase a token just tell the teller at the window the MRT station you want to go to and they will calculate your fair and program the token to contain that fair. You tap the token on the turnstile as you enter the station and then as you leave the station you insert the token and the turnstile will swallow it before letting you out.

If you plan on taking the metro system to the airport, you will probably use a combination of the Skytrain the MRT and the ARL so you will use the rabbit card for the BTS SkyTrain, Purchase a token to use the MRT, and then purchase another token to use the ARL which is the airport link.

Furthermore if you are traveling during weekday commute hours in the morning or in the afternoon the metro will be very crowded and trains will be over full.

However I found that the ride from my hotel to the airport was much easier and much more stress-free than the ride from the airport to my hotel in the beginning of my trip. It was well worth it. And cost me a little over five United States dollars.

There are a couple of apps that you can use to help you navigate the Bangkok Metro system.  There’s the BTS metro and the BTS Skytrain apps. I found, however, that all I really needed was a download of the metro system map and knowledge of the nearest station to my destinations.  I never waited more than 10 minutes for a train.The metro system is pretty regular and reliable. 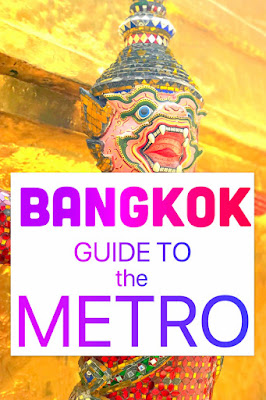