Playa Flamenco in the island of Culebra is consistently rated as one of the top beaches in the world. So of course I had to make a special day trip there from San Juan during my recent Puerto Rican vacation.  This post details my flight to and from Culebra, practical tips once you get there, and what it’s like. 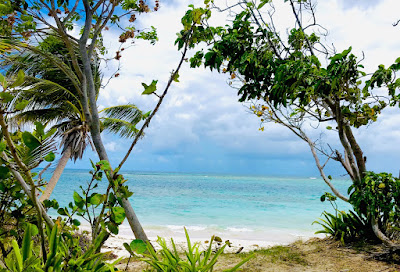 There are two ways to get to the island of Culebra from San Juan: by boat and by air.

At first glance, taking the ferry seems like a no-brainer. But after having read the difficulties of trying to actually catch the passenger ferry itself, which includes at least an hour of standing in line just to purchase a ticket (each way) and not being guaranteed passage because there might not be room, I decided to explore other options. Note that there is currently no system in place to buy tickets online.  If you do a search, what comes up are third party vendors who purchase a ticket for you for a markup, but having a ticket does not guarantee you passage. 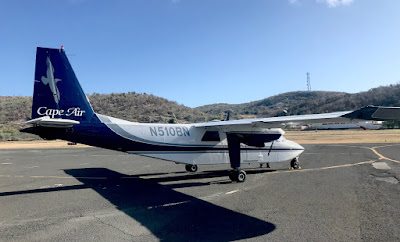 If by air, there are several airlines that fly out to Culebra from San Juan and they all run around a $100 each way, for a total of $200 round trip.  When I added the cost of renting a car to drive to Ceiba (where the ferry terminal is) or taking an Uber both ways, including the ferry tickets, the round trip airplane fare doesn’t seem prohibitive, especially since it guarantees peace of mind.  One option to consider is taking the ferry one way and a plane flight the other way to cut costs.

My flight through Cape Air departed at 6:30 a.m. and lasted approximately 25 minutes.  Even though it is a very short domestic flight, you still have to be through security at least 45 minutes before your flight. I got to the San Juan airport too late and had to sprint through the airport to get to my gate, which felt like a mile from security.  Please note that you have to check in in person. Personnel weigh all your bags, even if they’re carry-on only and ask you how much you weigh – all because it is a very small plane that you will be flying.  Every pound counts.

I was escorted onto the tarmac by an air traffic controller and all my bags were stowed away in the back, where they were inaccessible.  I was lucky enough to be the only passenger during my flight to Culebra so I felt like a VIP. The plane itself was a BN-2B Islander and had 8 seats, plus two for the pilot and co-pilot.  Like larger airplanes, there was an in-flight magazine, safety card and a vomit bag.  Since I had never flown in such a small plane before, I was very concerned about the flight itself.  I had no need to worry. The skies were clear and the ride was very smooth. It was so thrilling to be high up among the clouds with unparalleled views of the wide blue sea.

One thing to note is that it is very noisy inside the cabin so bring earplugs for a more enjoyable trip.

When it comes time to land, you will hear the engine quiet down and then the pilot will turn towards the space between two mountain peaks then make a left turn where all of a sudden a runway appears, like a miracle.

The Culebra airport is very small; it doesn’t even have a security checkpoint. There is a café inside and restrooms. 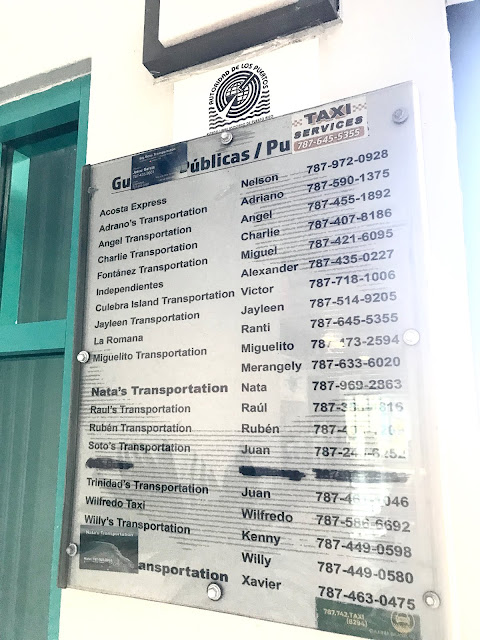 By the door is a list of publicos or taxis to call if you want a ride to the beach. This part was the only frustrating thing of my day trip. I called most of the numbers on that list and most people didn’t answer, one person flat out said no, and another said he was out of town.  If you find yourself in the same predicament, note that you can walk from the airport to Playa Flamenco – it will take about 20 minutes.  As you’re exiting the airport, turn right and go down that main road, which ends at the beach.

But the morning I was there, I didn’t know that. You can rent Jeeps or golf carts across from the airport.  A golf cart costs $58 for the day, a Jeep $54.

But I ended up not having to walk or rent a vehicle because a kind couple took pity on me upon hearing my troubles and let me ride with them on their rented golf cart, which took about 5 minutes.

Once you get to the beach, it costs $6 to park your vehicle and $2 per person.

There are restrooms, changing stalls, and outdoor showers.

There are also food and drink kiosks but I would recommend that you bring your own food.  The food from the kiosks are merely okay and rather expensive. If buying food to bring to the beach, there is a cluster of eateries and a small general store near the airport.  As you exit the airport, turn right, then turn right again at the main intersection.

Playa Flamenco is spectacular.  White sands, clear turquoise waters, coconut trees swaying gently in the breeze – it’s all out of a postcard. 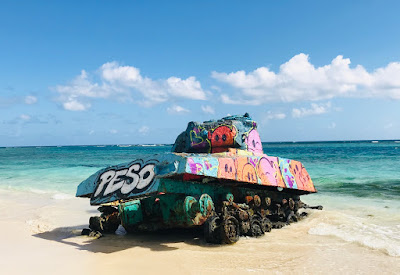 And then there’s the famous World War II tank beached on the western end, left there by the U.S. Navy and now painted like an urban work of art incongruously sunning itself on a Puerto Rican beach.  There’s actually another tank closer to the main entryway which has also been decorated and left on top of a little hill more inland.

Another thing to note is that there is a warning at the airport to be on the lookout for leftover munitions at the beach and in the water. So beware.

The flight back to San Juan was as smooth as the morning flight.  It was well worth the money spent to fly to Culebra.  I only wish I had more time there to explore other beaches on the island. 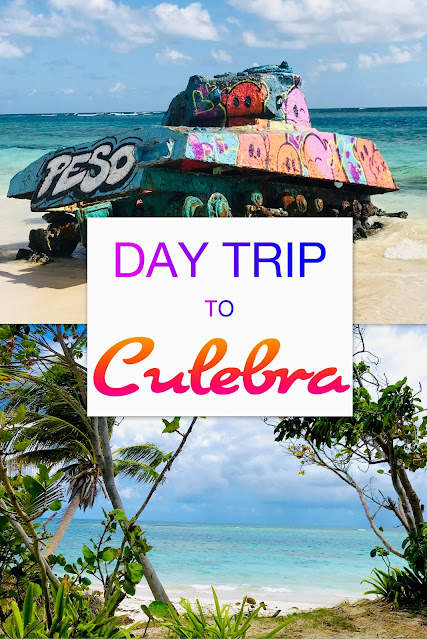