Book Review: Confessions of an Unlikely Runner by Dana Ayers 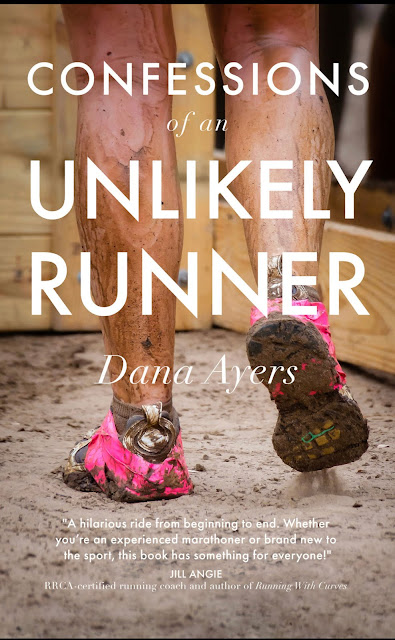 Witty, observant, and full of cringe-worthy confessions and heartwarming encouragement, Confessions celebrates both running and life. Part Bridget Jones, part Forrest Gump, Dana Ayers chronicles her awkward mishaps and adventures in transitioning from childhood bookworm to accidental accomplished athlete. Over the last ten years, Ayers has completed a vast array of races. She runs them all while admittedly not getting much faster, much thinner, or much more disciplined—though she has managed to be on national television, split open her pants, and get electrocuted. Ayers intersperses her hilarious yet relatable struggles with insights about how and why she keeps running. A self-proclaimed ambassador of slow runners, Ayers has completed dozens of endurance challenges, including Tough Mudder, the Ragnar Relay, Muddy Buddy, Warrior Dash, Run Amuck, the Army Ten-Miler, the Country Music Marathon, and many more mud runs, obstacles courses, and races. Her race descriptions will entertain seasoned runners and non-runners alike. Woven into the chaos of her running adventures is compassionate reassurance for anyone who feels like they aren’t fast enough, athletic enough, or strong enough to finish a tough race.

Though told with humor, Confessions’ stories share an underlying theme of Ayers’ serious reverence for the sport of running and the running community. Ayers describes experiences such as participating in a 1,000-mile relay for Boston Marathon bombing victims, and being overcome by emotion while observing wounded veterans struggling to finish a race. Her stories prove how life-enriching it can be to physically fight for something and to cheer on others who are doing the same. For anyone who has considered trying a marathon, an obstacle race, or simply taking up running for the first time, Ayers is your ambassador. If she can do it, you can too.

"Unlikely Runner" is exactly who I am and this book speaks to my experiences in running. Maybe not the vomiting, electrocution or torn pants parts (not yet anyway).  But the impostor syndrome I feel most times.  Despite her rather impressive accomplishments, Dana describes to a "t" how I feel as well: apologetic and reluctant to call herself "a runner." In her first chapter she called herself an unathletic book nerd growing up and immediately I felt a kinship with her - That's me! I exclaimed in my head.  I suspect that a lot of us who consider ourselves unlikely runners will love this book, as we have found our patron saint.  She pokes fun of herself and her many misadventures so that not only did I laugh throughout the book, but also became even more enthusiastic about this passion of mine.  Interspersed between anecdotes are her "pro tips" such as:

"Running offers the opportunity to prove ourselves.  We aren't just going to an event to observe, we're making our bodies obey us and accomplish something."

"Another motivator I have for running comes from answering a classic question that I'm sure everyone asks when they're considering doing anything important in life, like choosing to become a surgeon or deciding to run for President - "What kind of outfits can I wear?"

As well as encouraging observations:

"An I will run. Because, even with all the doubts and struggles, I am a runner.  And that is what we runners do.  We run. Occasionally we wear tutus and get electrocuted, but mostly we run."

Confessions is a fabulous, feel-good book, one that I suspect I will reread every time I feel a little motivation to at least complete, if not conquer, another race.